For the past 16 weeks I've been racking my brain trying to come up with the perfect words to share this news....
Then one day last week I snapped a picture that summed it all up with no words at all. 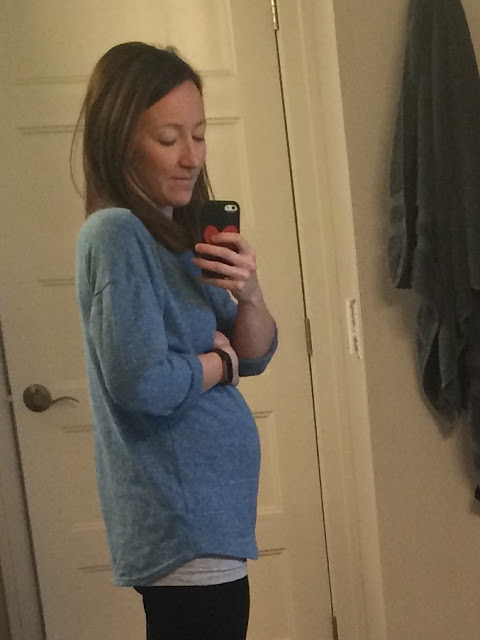 Beyond excited (and just a teeny tiny bit terrified) to welcome this sweet babe into our crazy crew.

This year Harrison is finally old enough to take part in one of the peewee sports that our small town has to offer. Micro soccer registration took place in early March and we spent the next month preparing our little Pele for his first real "team" experience. We went shopping for all of the necessities (a brand new soccer ball, the tiniest shin guards known to man, and a super awesome Ninja Turtle water bottle) and had lots of talks about listening to our coaches and trying our best.

Come game day we weren't quite sure what we were going to get - but we did know that H.P. Ritchie looked the part of a soccer super star. 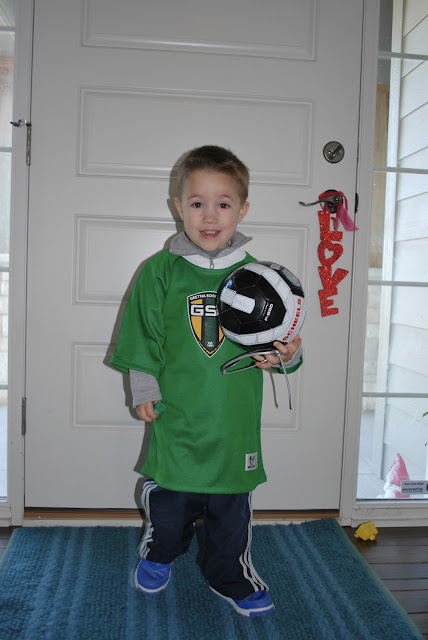 Week 1 was a pretty miserable one. We woke up that Saturday morning to 40 degree temperatures and winds strong enough to blow our budding soccer star right off his feet. It was downright frigid and it took everything this soccer mom had to even coax Harrison out from underneath a blanket on the sideline. 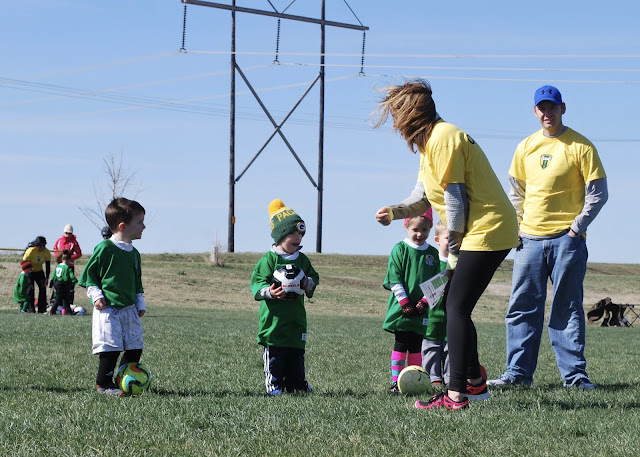 He was pretty hesitant throughout, but with some extra encouragement from Coach Sarah and Coach Gabe, Harrison ended up having an "okay" time. He learned to dribble the ball using little baby kicks, played a game called Kick the Coach, and got some extra loud cheers from his sideline supporters when he nudged the ball into the net for a goal. 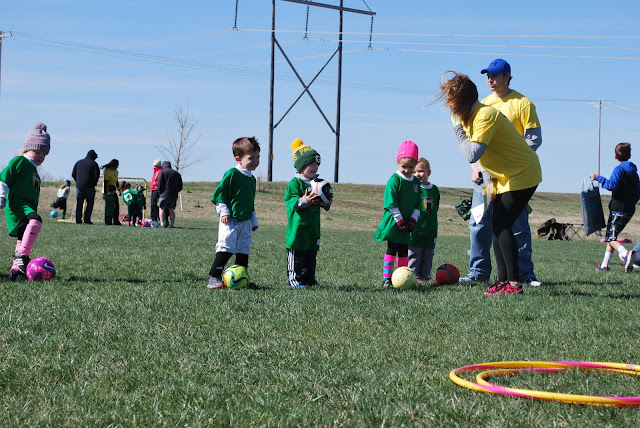 A frozen Max on the sidelines was less than impressed. 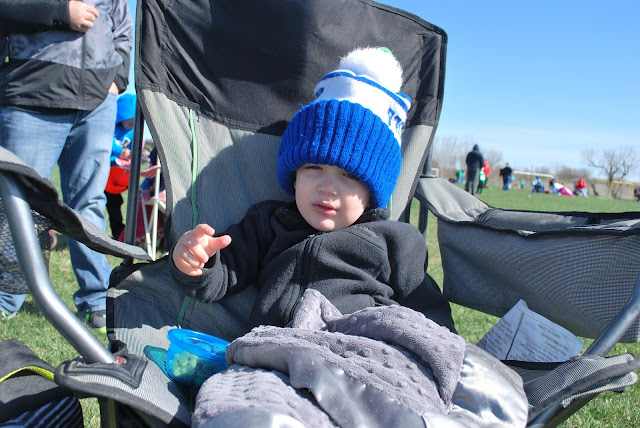 Week 2 brought with it more frigid temperatures. I stayed home with a sick Maxo, and Dad braved the cold for what I hear was a less than stellar performance by Harrison. Lets just say that he wasn't feeling soccer that day. 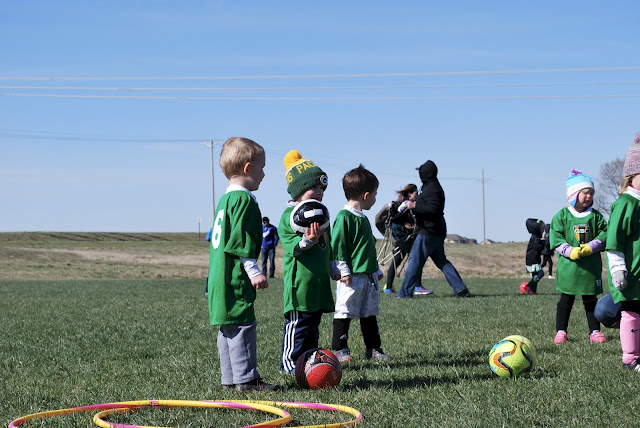 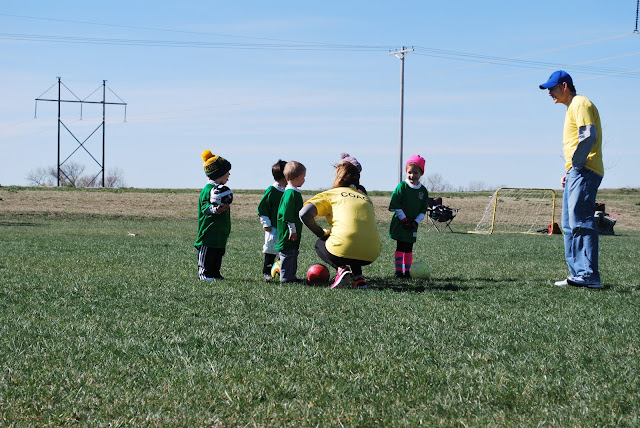 Week 3 brought with it warmer temperatures and growing confidence.  While he still needed a little nudge to get going, it was obvious that Harrison was more comfortable on the field. He gave us lots of smiles and thumbs-up from the field and truly seemed to be enjoying himself. He definitely eared that post-soccer snack (his favorite part of the game) on week 3. 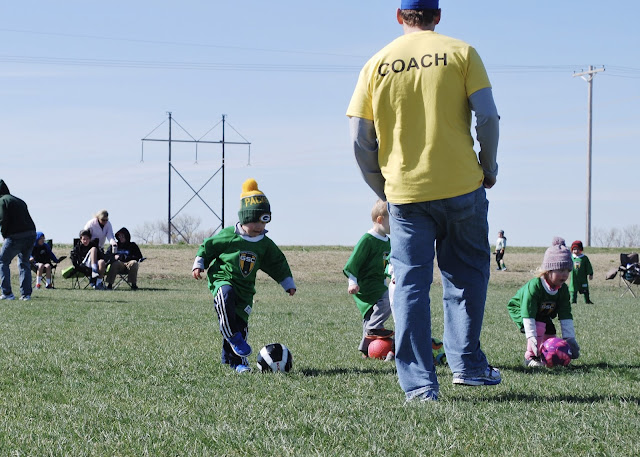 Harrison Paul, mom and dad (and Maxo) are so very proud of you. We know that being a part of a  new team with new kiddos pushes you well beyond the borders of your comfort zone, but you are being so brave and slowly learning that "new" doesn't necessarily have to be scary. 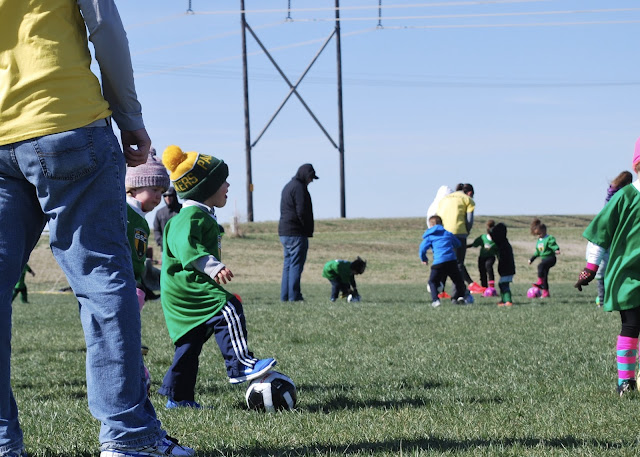 Posted by Kristen at 3:45 PM No comments:

It's no secret that the whole Easter egg dying process gives me heart palpitations. Rough little boys. Fragile little eggs. The insane mixing of colors. Just thinking about it pushes my OCD personality to the edge. Over the years, however, I've gotten better at "letting kids be kids" and I can tell that the more relaxed I am, the more fun Harrison and Max have with the process.

This year was no exception. 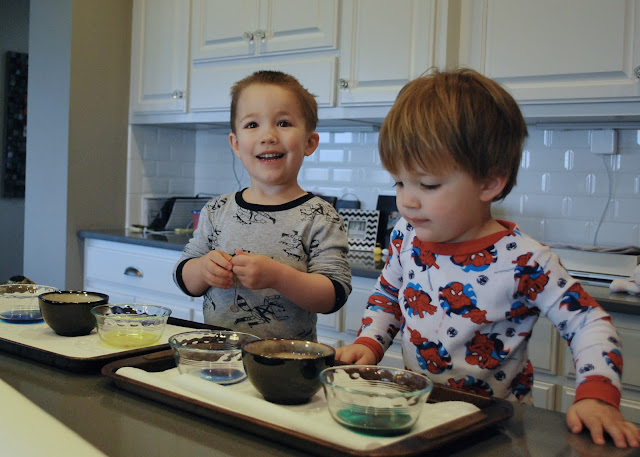 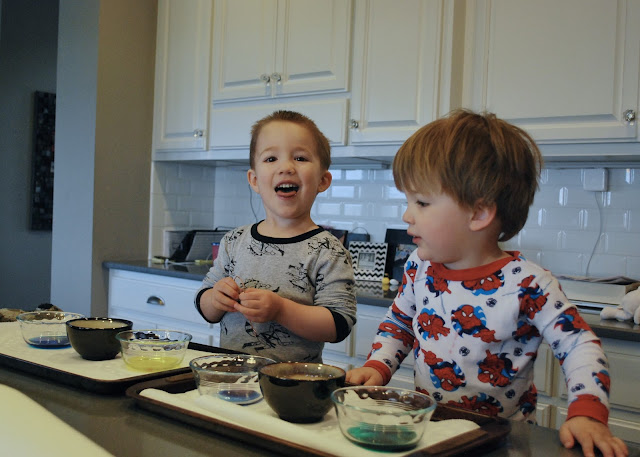 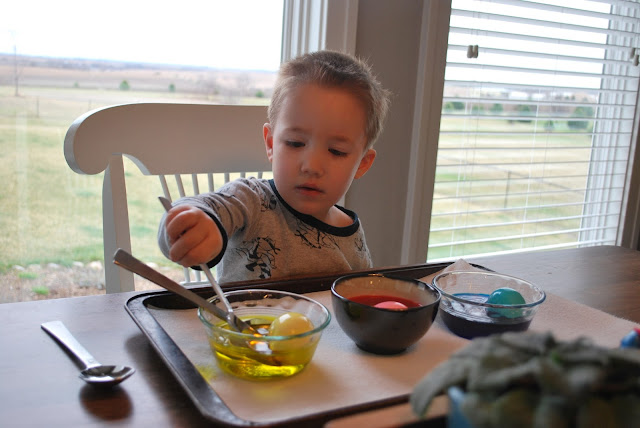 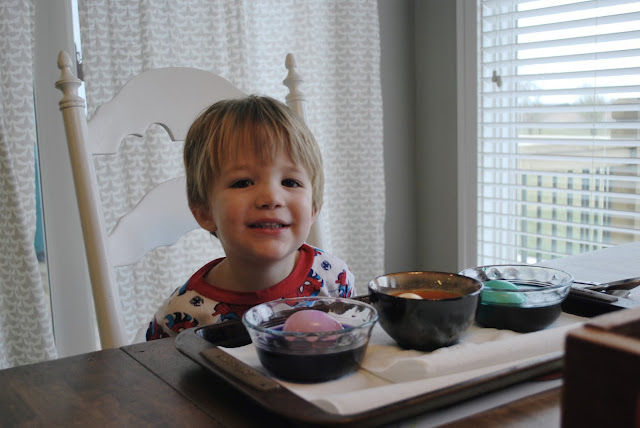 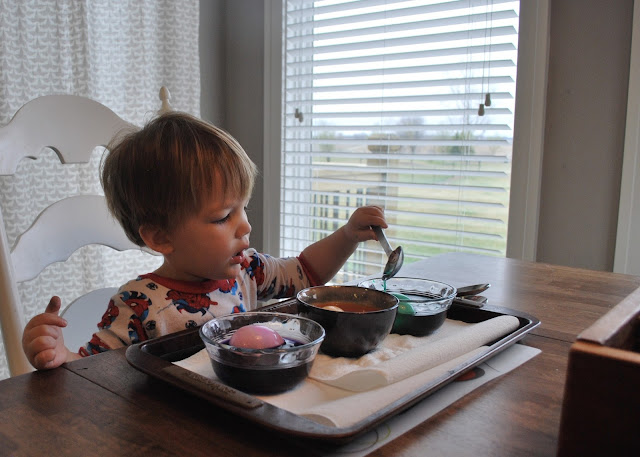 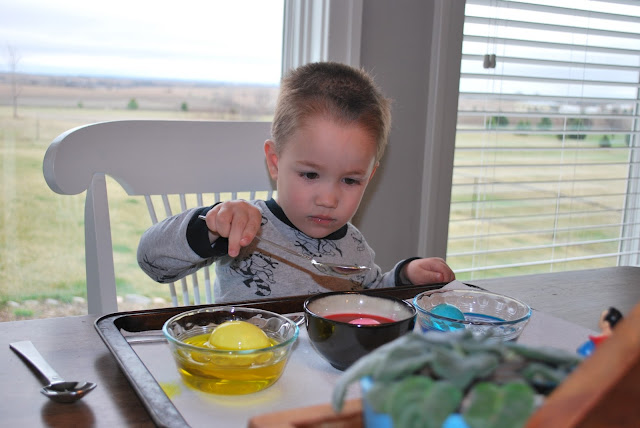 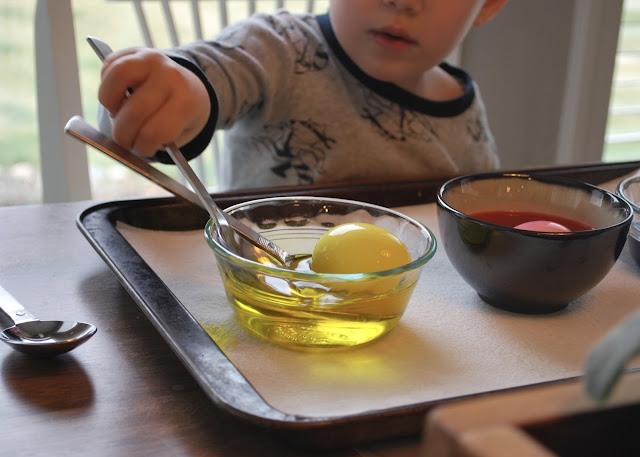 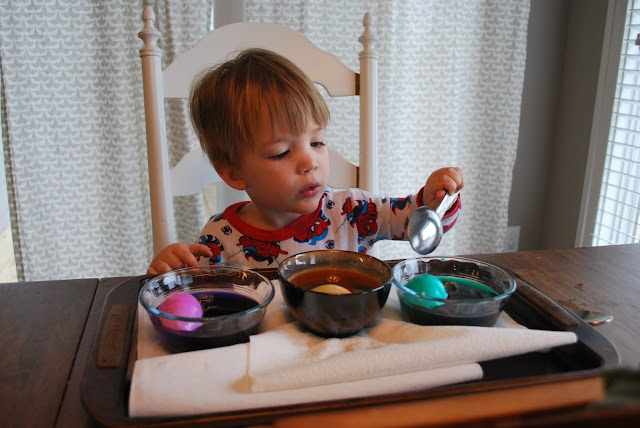 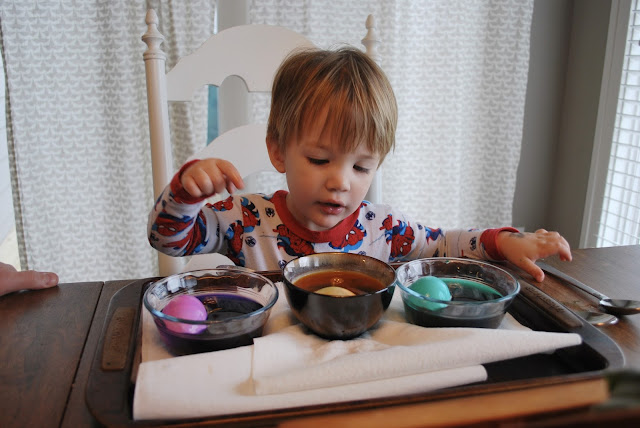 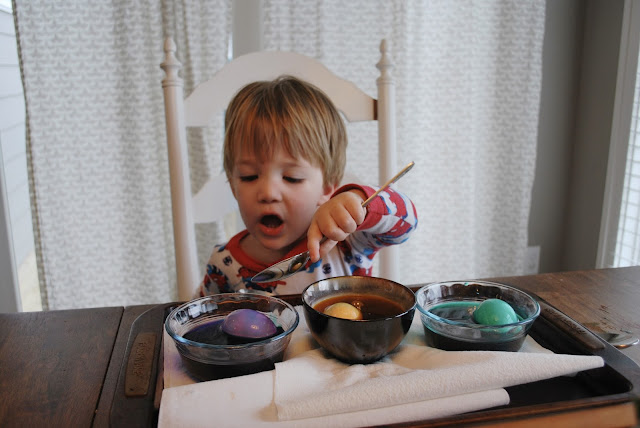 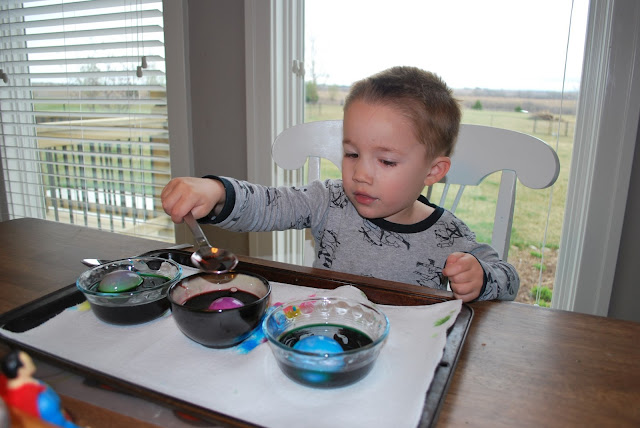 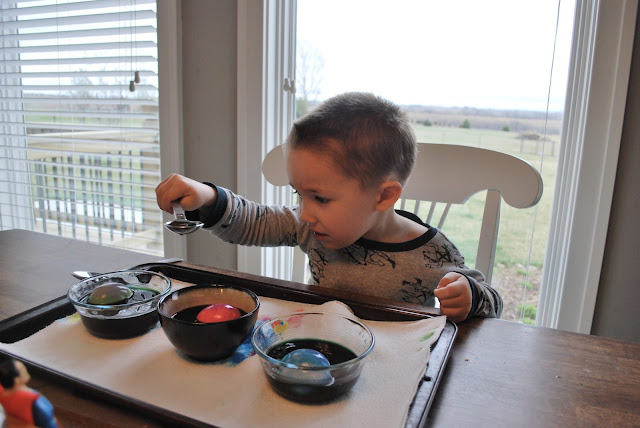 I'm so thankful for these two boys and the lessons that they teach me every single day. I love creating memories with them and establishing our own little traditions that they look forward to year after year. When it's all said and done, a dozen purple eggs isn't such a bad thing.

Posted by Kristen at 4:45 PM No comments: