The scene is perfect.

A little girl sitting in her high chair in the middle of our Sioux Falls backyard.  The grass is emerald green.  The sun is shining.  A gentle breeze blows her fine auburn hair around her face.  She's eating...something we always tried so hard to get her to do.   And she's smiling the most amazing smile.

I don't touch her or talk to her.  I just stand and watch from a distance.

And then I wake up.

I've had 3 Charlotte dreams in the past 3 years, yet this is the one that I come back to over and over again.  When my mind wants to carry me back to that day.  When the air is sucked out of my lungs and I feel like I'm going to suffocate.  When I feel like the ground might crumble beneath my feet.


Today I need that little girl in the high chair. 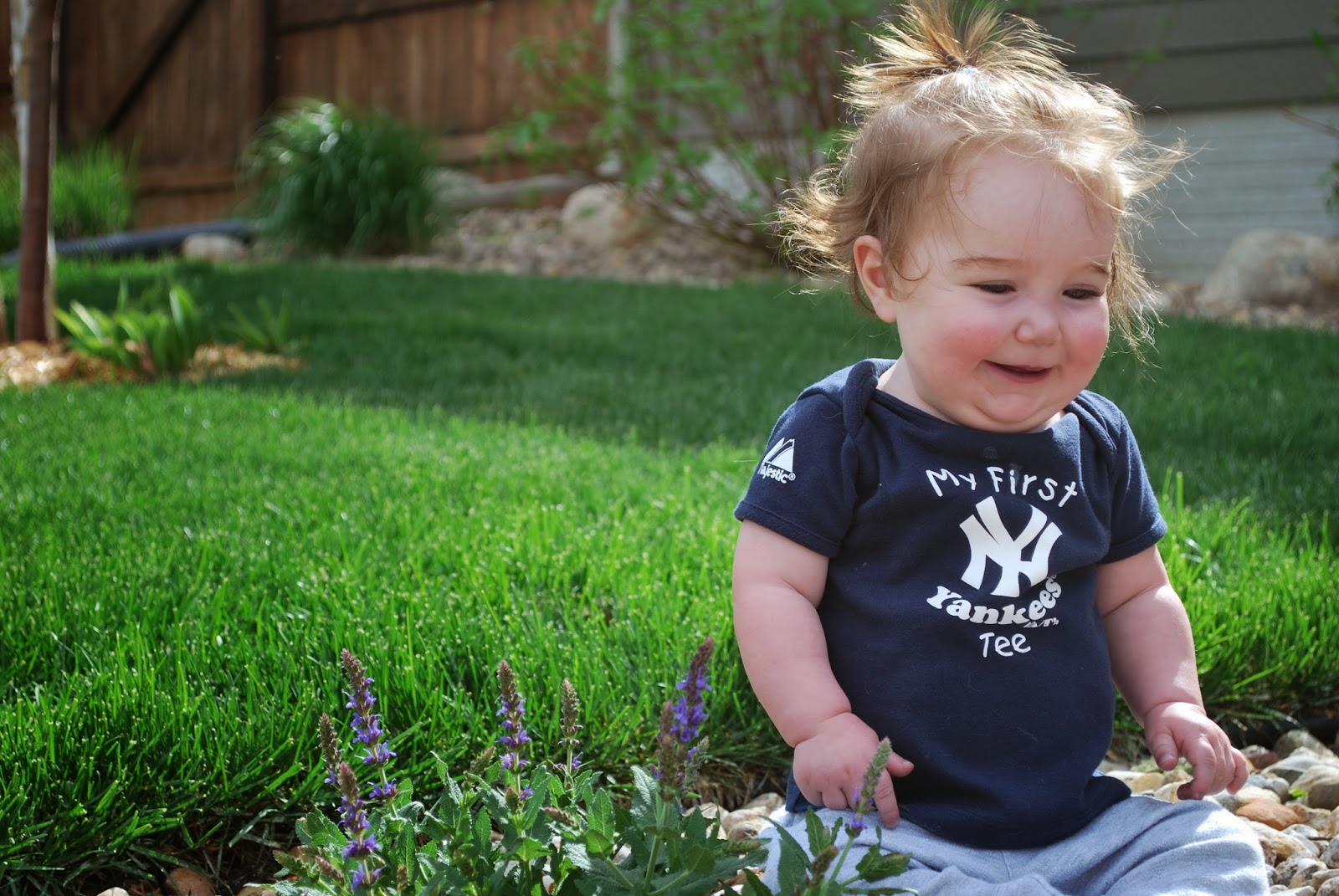 Tonight I gave in to all of Harrison's bed time stalling techniques....we read countless books, wore "zebra hats," gave horsey rides in bed, tickled, giggled, pointed and named every part of my face a million times, talked about tractors, threw bears overboard and had to rescue them...you name it, we did it. I probably would have stayed there all night had he not picked his nose and tried to feed it to me (multiple times).

Tonight my heart is heavy with the knowledge that there is never a guarantee of tomorrow. Snuggle your babies tight. Sneak into their rooms and give them kisses, even if it risks waking them up.   Whisper "I love you" in their little ears even though they're sound asleep.

You never know what tomorrow will bring.

Here we are, 22 days into May.
Two "hard(er)" days behind us.
One of the hardest looming just over a week away.

We've made it through the past 22 days with relative grace.  Yes, there have been tears along the way and quiet moments moments of grief, but there have also been lots of smiles, conversations with our boys about their special angel in Heaven, and love....SO MUCH LOVE...coming our direction from all of you.  God continues to bless us with "purple eggs"...and they couldn't be coming at a better time.

The "purplest" of all purple eggs:  Mother's Day with my boys (all 3 of them!) 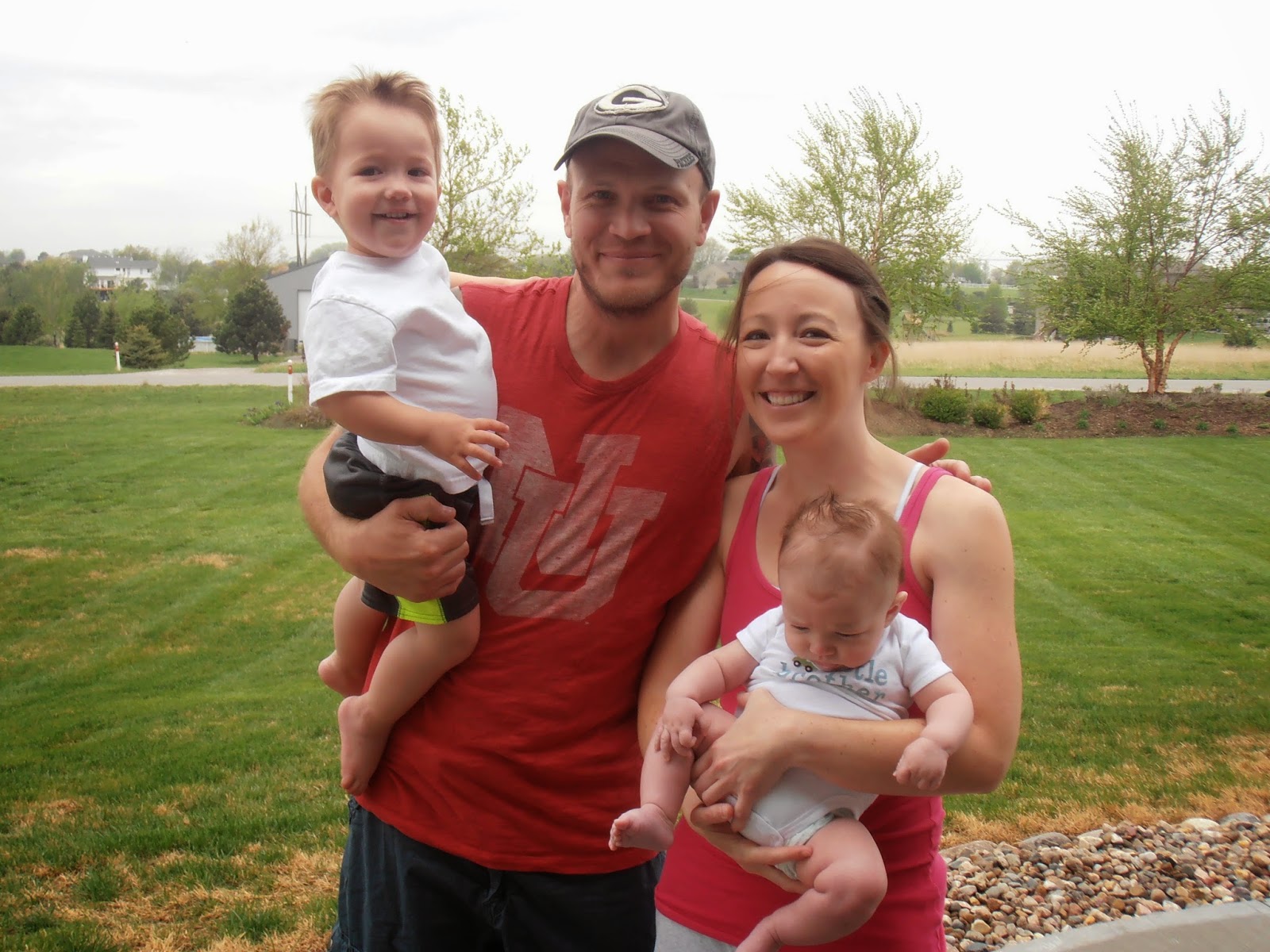 Hilarious day-to-day moments with Sir Harrison--
like finding a handful of rocks in his shoe! 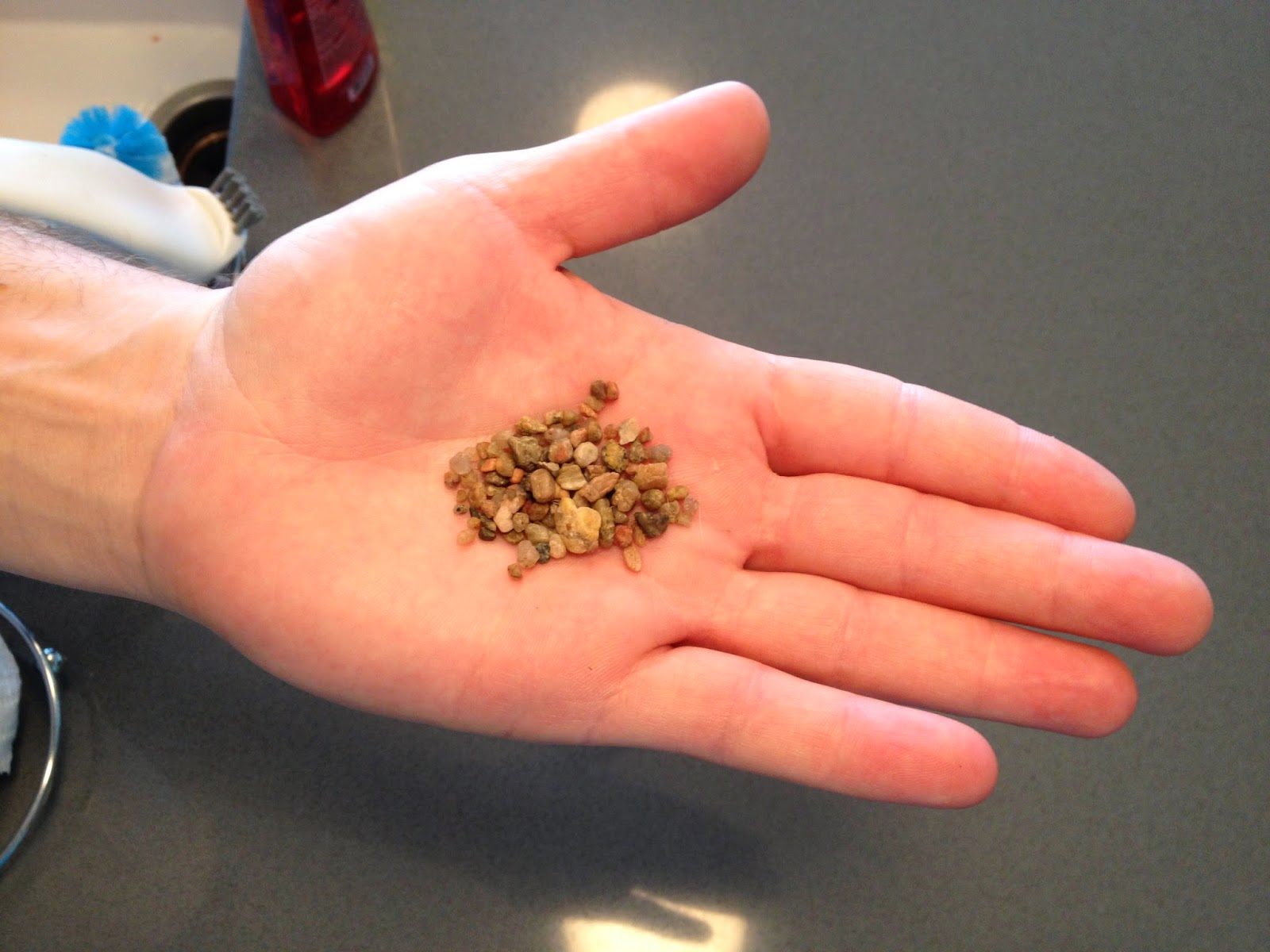 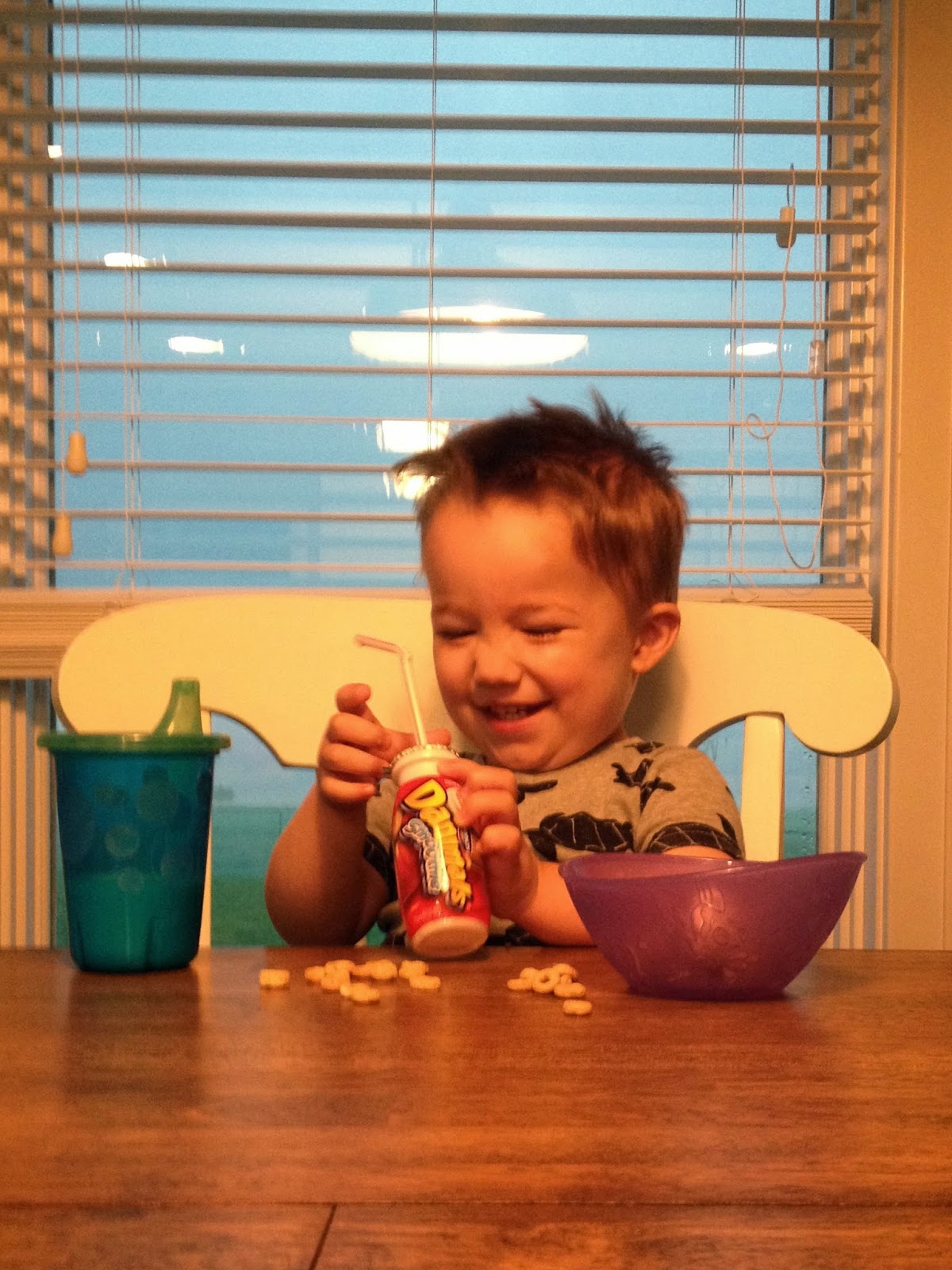 Love for our little girl covering some very special rocks. 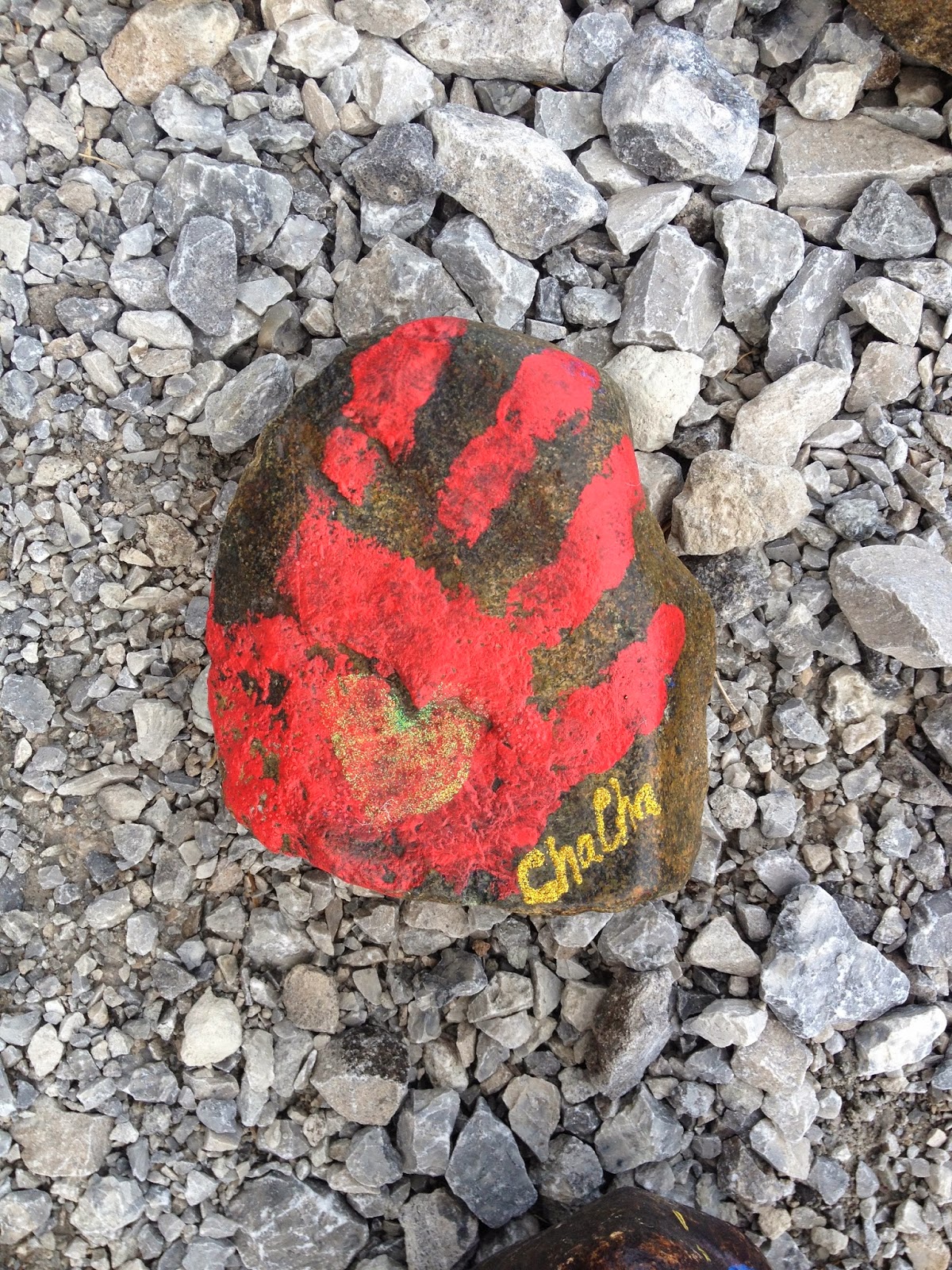 Our new Pygmy hippo.  He/She lives at the zoo, but a memorial made in Charlotte's name pretty much makes him ours, right?  Harrison loves to look at "ChaCha's hippoooo" and can't wait to go visit. 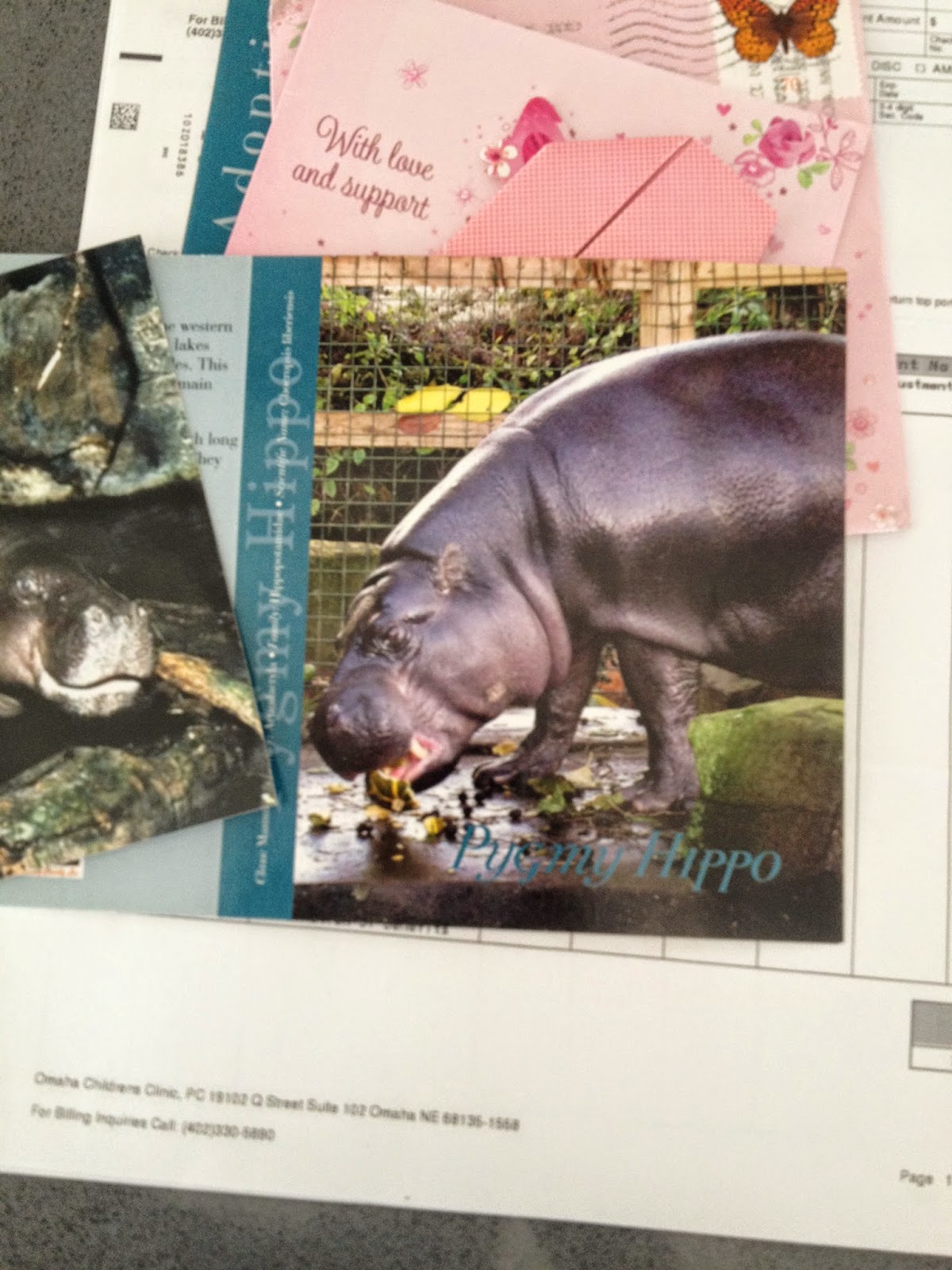 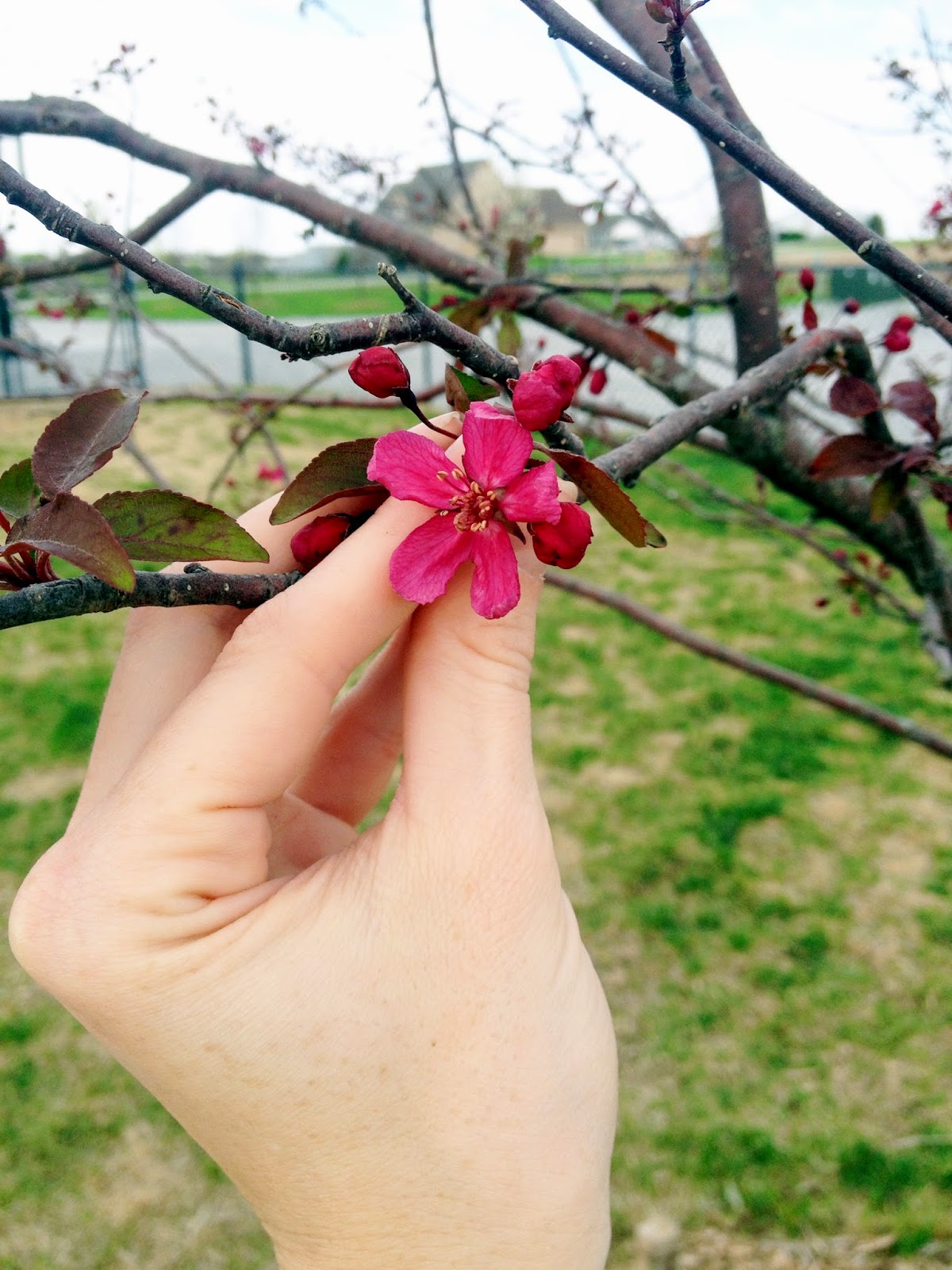 Moments that remind me of how blessed we are to be back in Omaha closer to family. 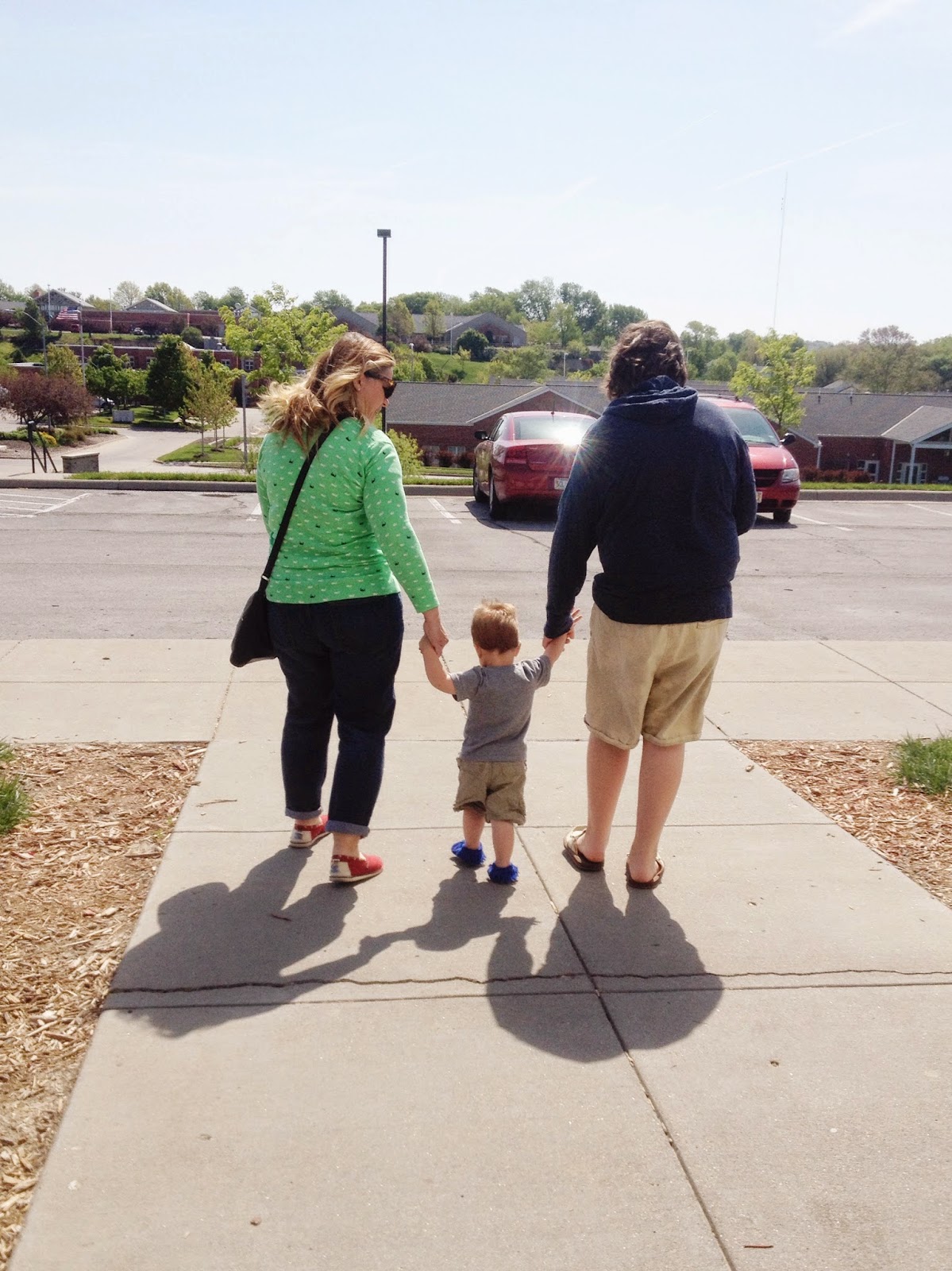 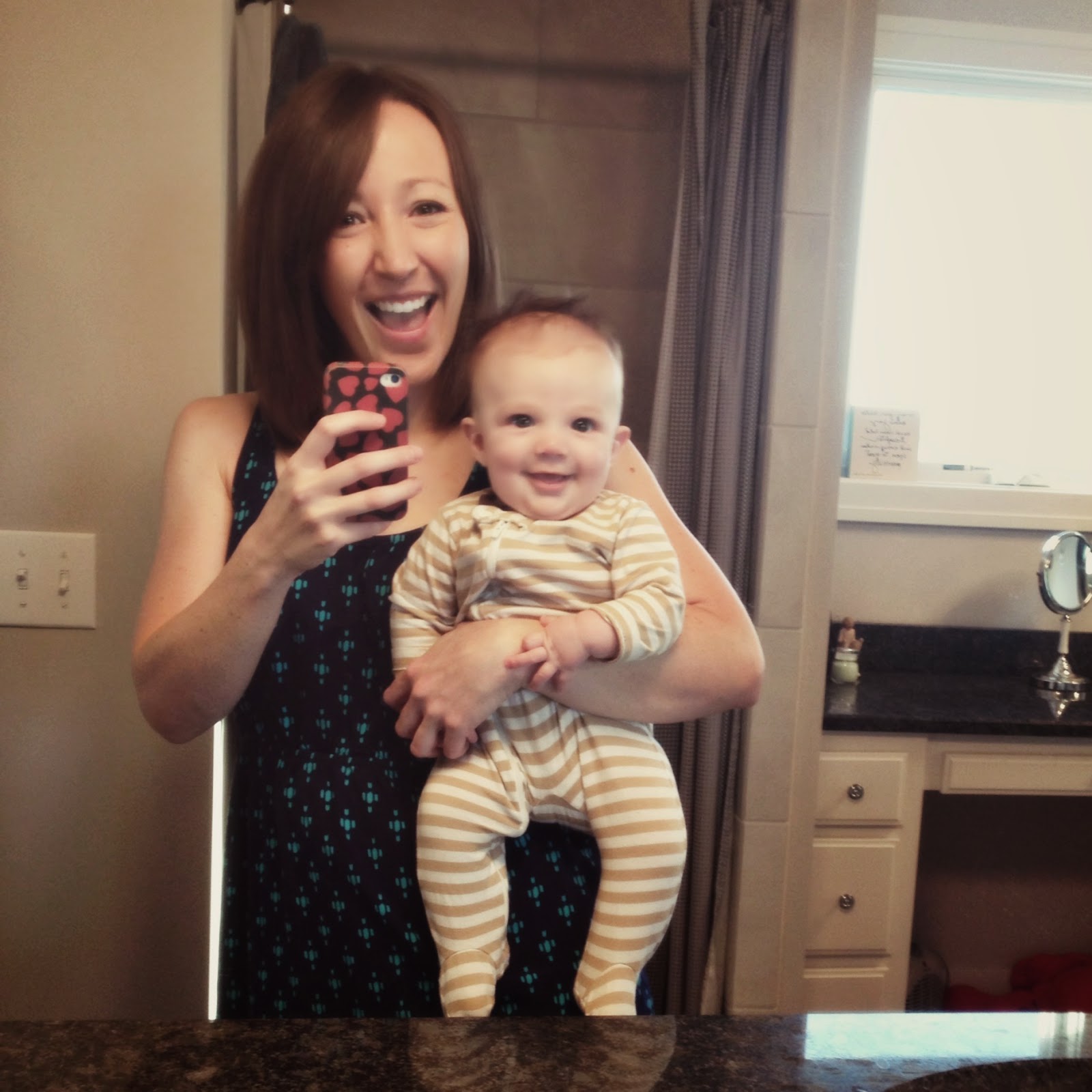 A butterfly Barbie left behind by some of the sweetest girls I know. 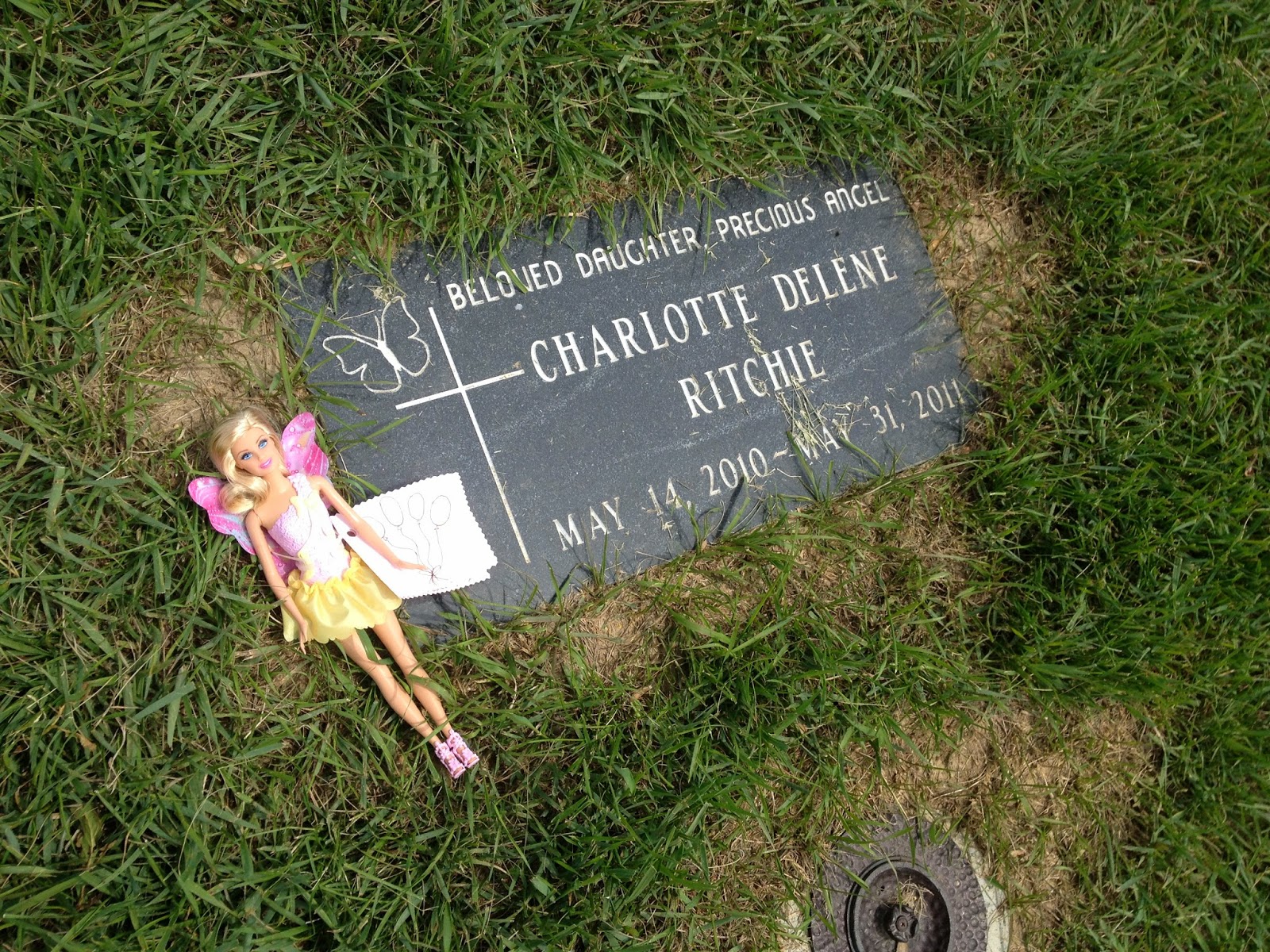 A surprise birthday breakfast, complete with coffee, "cake," and candles delivered to my work. 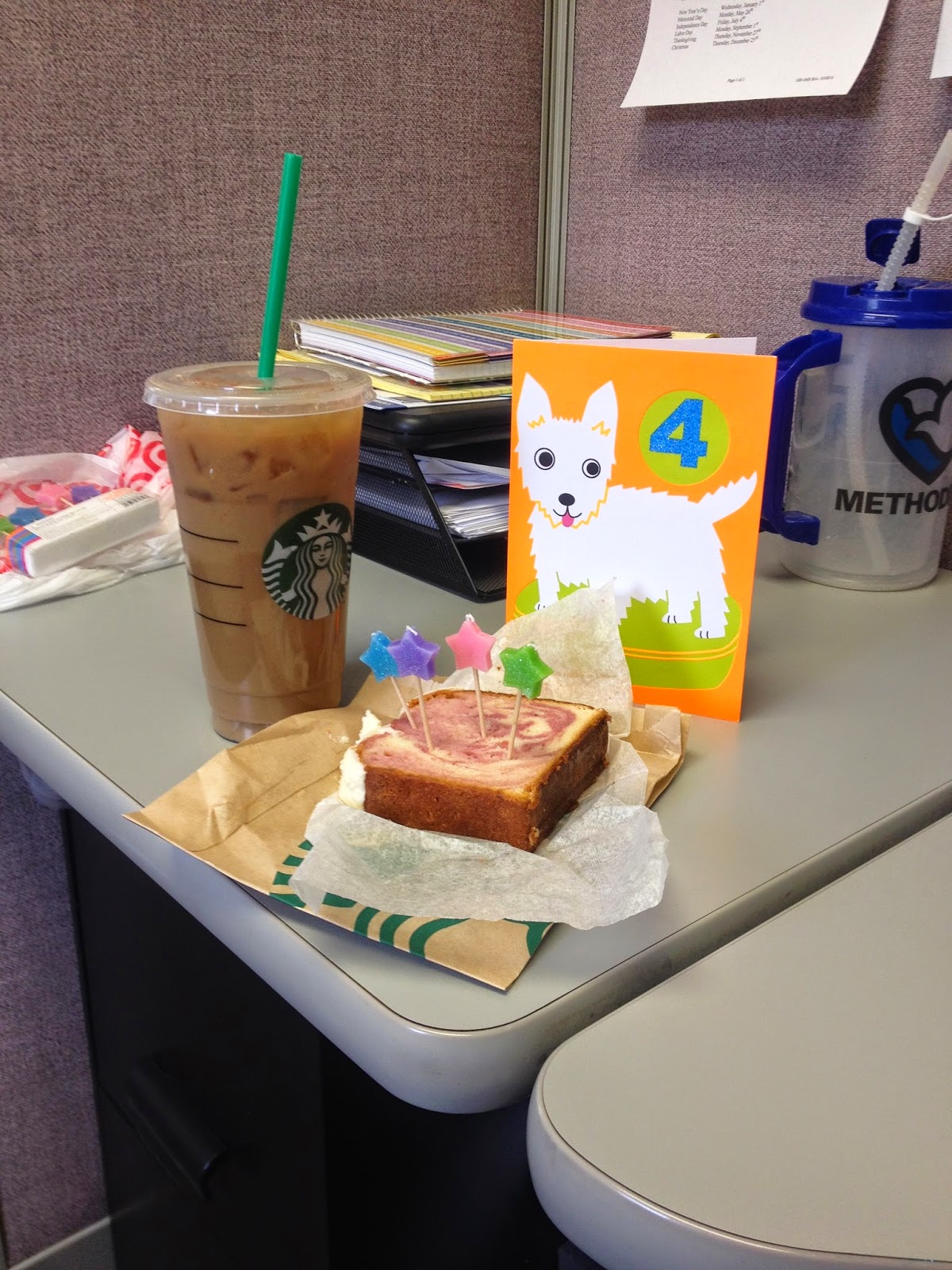 Our birthday tradition...cupcakes, candles and a little "Happy Birthday." 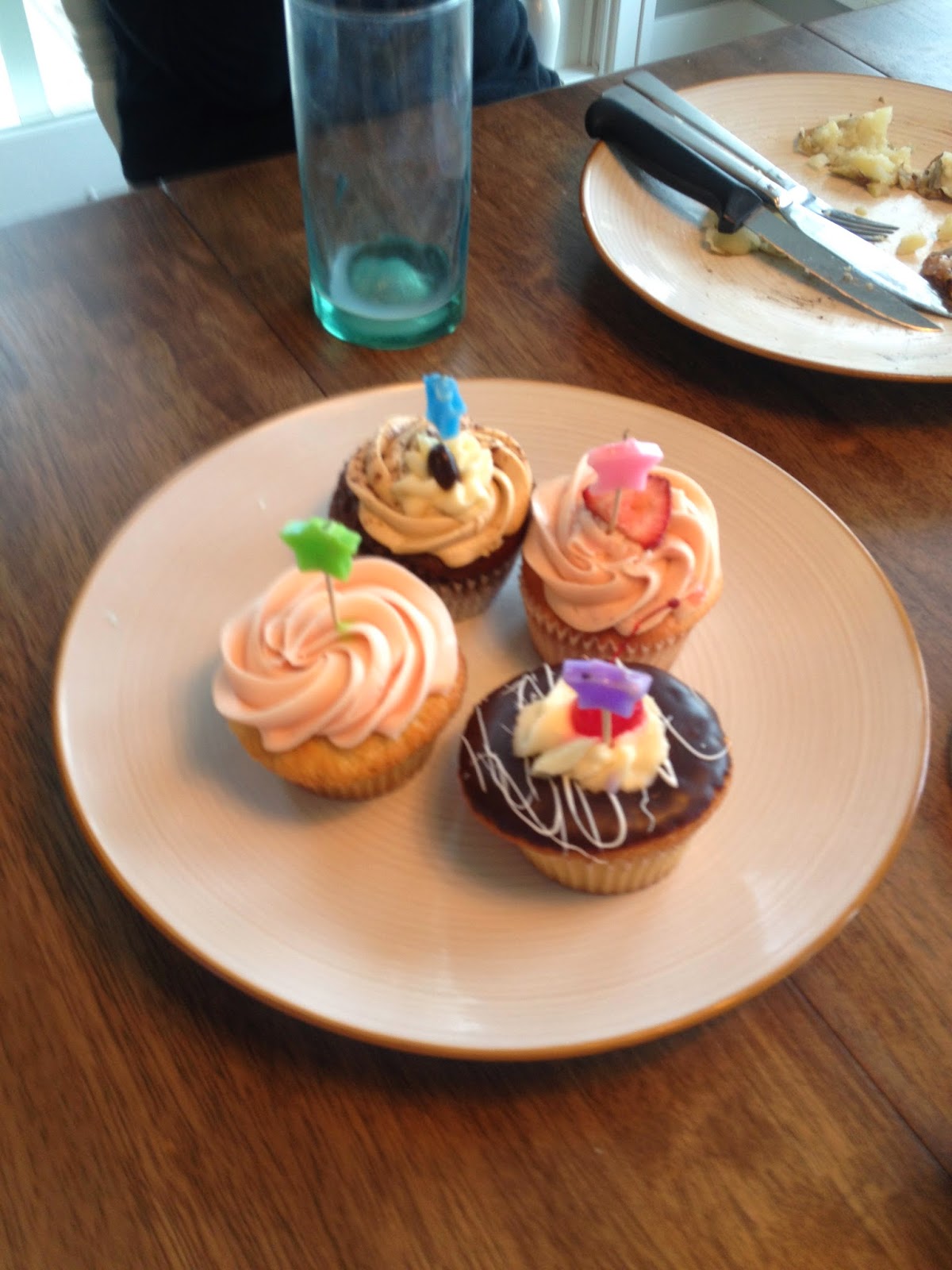 Balloons sent to sweet Charlotte in Heaven (or to the moon if you ask Harrison).
Not 20 minutes later she sent us the most amazing thank you. 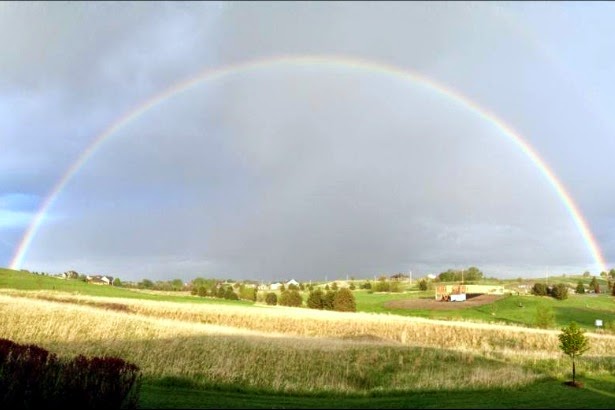 There is no doubt in my mind that Charlotte has had her hand in each and every one of these moments.  Whether through a look in her brother's eyes that reminds us of her, a perfectly timed "Charlotte song" on the radio, or the most perfect rainbow I've ever seen - she is with us.  Every day.  Every moment.  Always.


Thank you, God, for purple eggs.

Posted by Kristen at 2:44 PM No comments:

First time mom-to-be.
A baby with a dropping heart rate.
A wild goose chase to find my husband.
A 3 hour drive to be closer to the hospital that would give our baby a chance at life.
News that I needed an urgent c-section.

All on top of a CHD diagnosis and the unknowns that come with it.


But then this happened.... 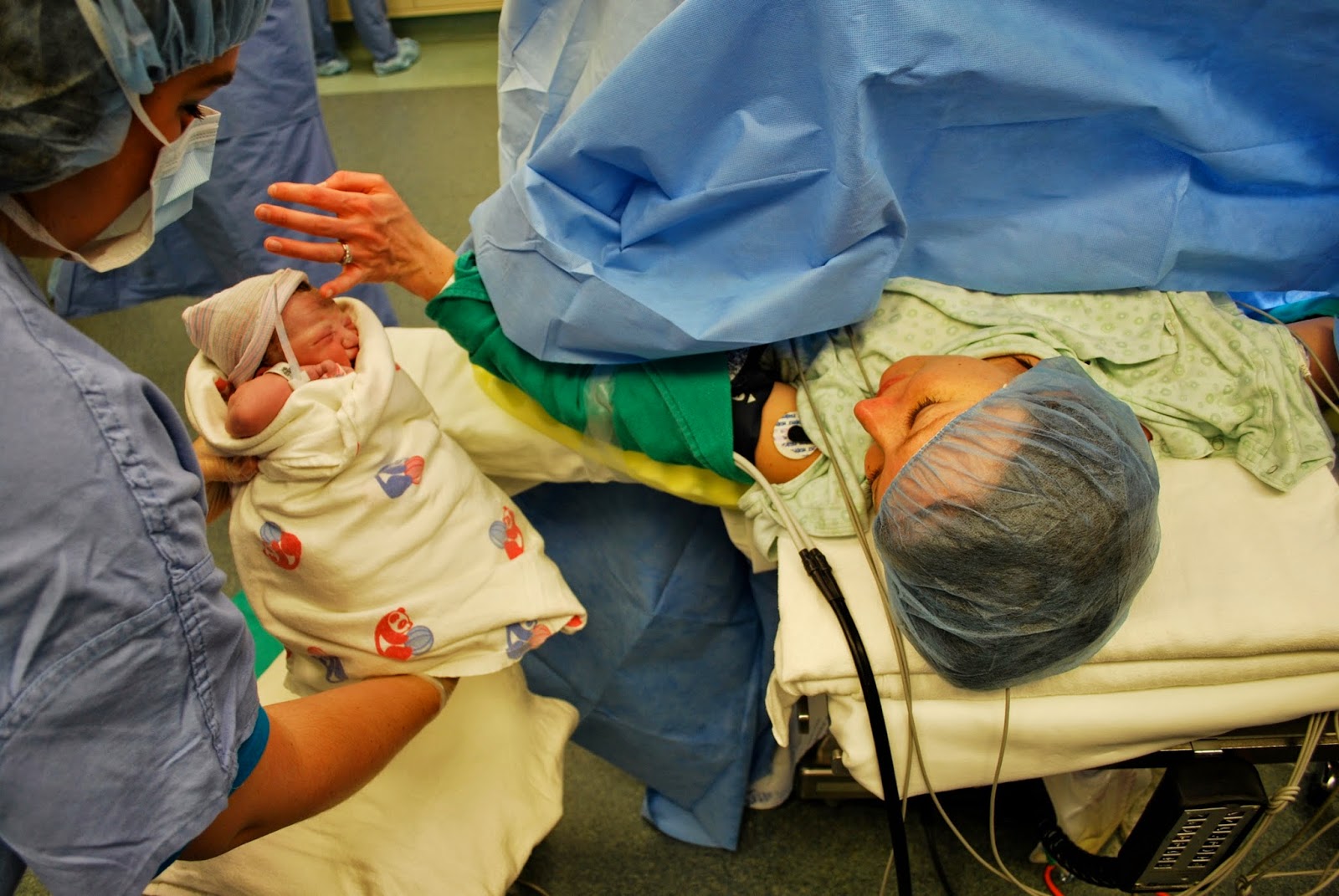 And in that moment, nothing else really mattered.

Happy 4th birthday, Sweet Charlotte.  I wish more than anything that you were here with us today, celebrating your special day in the park with your brothers.  I'm sure that as a spunky 4 year old you would be bossing them around like all good big sisters do!  Instead, we'll be blowing out your candles on our own, blowing bubbles and sending you balloons to play with in Heaven.  I hope you like them!

I love you, baby girl.  Forever and Always.  Beyond words or explanation.

Three months old already?  I know, I know....between 3 kiddos I've probably said "I can't believe they are "X" months old already" about 100 times, but it's so true.  Time just flies.  Before I know it, Harry and Max will be moving out, leaving their mama behind in a puddle of her own tears wondering "how the heck is it possible!?"  Ok, so I might be jumping the gun just a little bit, but holy cow, time needs to slow the heck down!

Month #3 was an exciting one in the Ritchie home, full of lots of changes for sweet Max.  Looking at him from last month to now, he hardly looks like the same little boy.  His cheeks have bulked up, his hair has thinned out (haha!), and his personality is REALLY starting to shine!  ﻿

{Maxo McSmiles}  This sweet little kiddo has some pretty awesome smiles going on lately.  He loves face-to-face time and always flashes his killer grin when he's talked to.  We've also been getting lots of giggles....they MELT me!

{ZZZZzzzzZZZZ}  Early on in the month we were on a pretty consistent sleep schedule at night.  Max was down by 7:30-ish and would sleep until around 4.  At that point he'd have a bottle and go right back to sleep until 7.  Well...since his big move from the bassinet to the crib, things have gotten a little hairy.  Now instead of a 4am cuddle, he's opting for one at 2.  Mom's not a huge fan and hopes that it is short-lived.

{Chunk}  Our little tiny babe is officially growing like a weed.  These days he's rocking a double chin and has the most amazing thigh rolls (why are they so cute on babies and not grown women??)  He has a long torso like his PopPop and as a result, has been wearing 6 month onesies.

{Bump on a Log}  Unlike his big brother who decided to roll from his belly to his back at 2 weeks, Max prefers to be....well....lazy.  He gets himself about half way over and then just decides that it's way too much work.  Silly boy.

{Daycare}  I didn't mention it in his 2 month post - probably because I was too depressed about it - but Max is officially a daycare kid.  Really though, we know he's in great hands.  So far he's doing great other than some napping issues.  He gets to see Harrison throughout the day and is already making some little friends.

{Miscellaneous}  He's obsessed with his hands, extremely impatient when he's hungry, and is turning into a splashing machine in the bathtub. He loves to watch his brother (and his puppies) run around the living room and to spend time outside in his bouncy seat.  Occasionally his big brother sprays him with the hose.  THAT, he doesn't love. 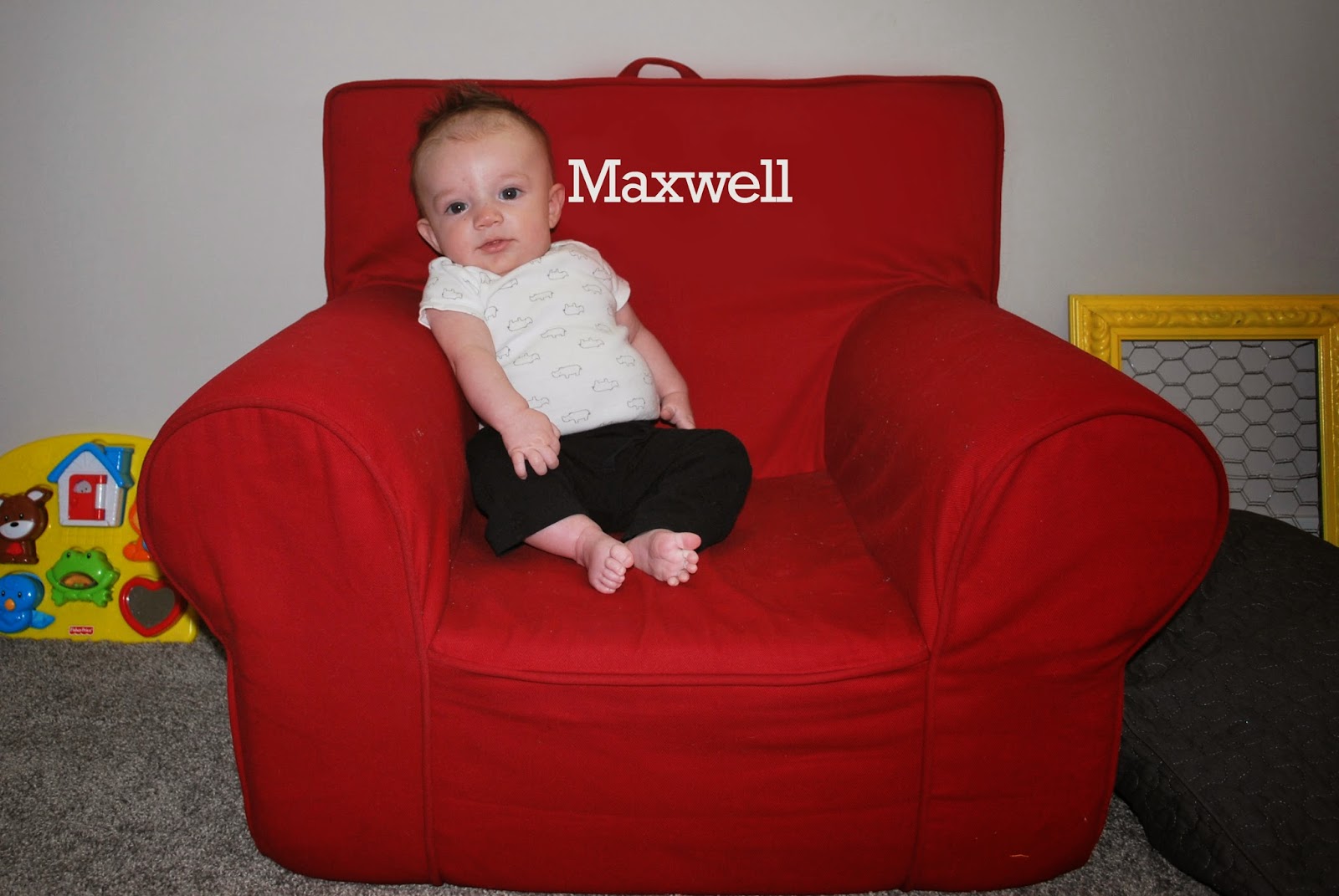 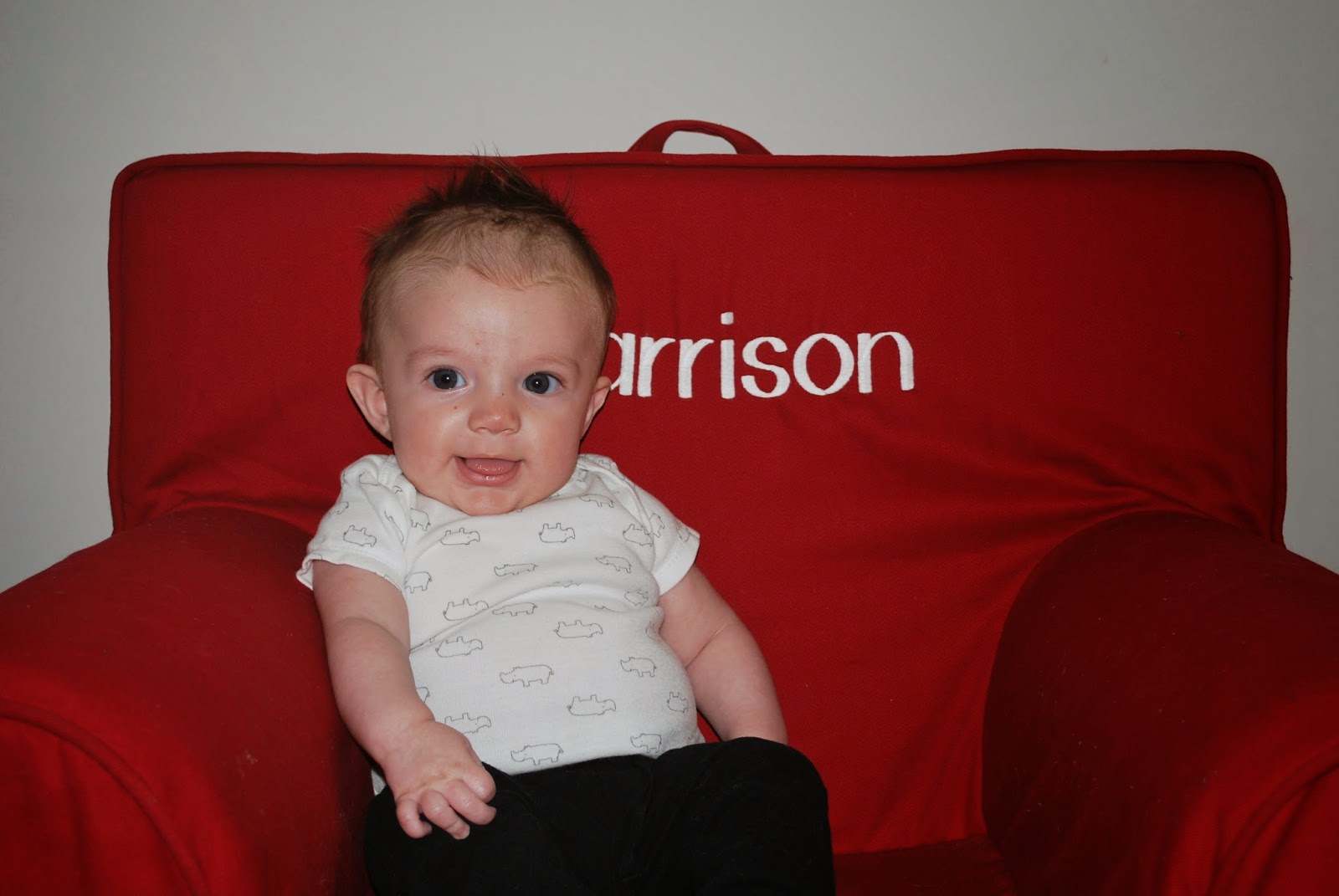 All was going well until he found his feet down there.  Then he had no interest in mommy or her camera! 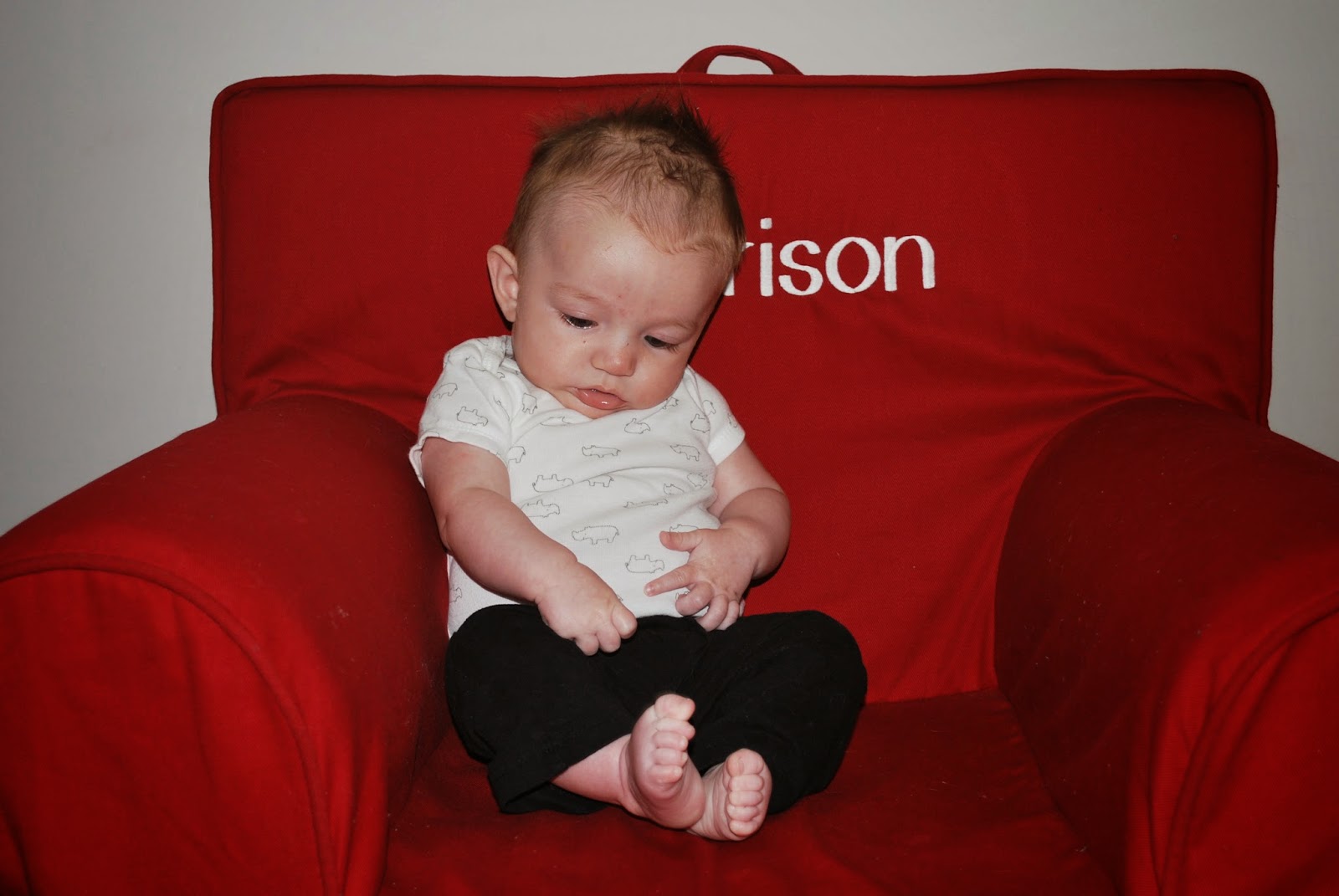 And then, like last month and the month before that, he spit-up on himself to tell me he was finished. 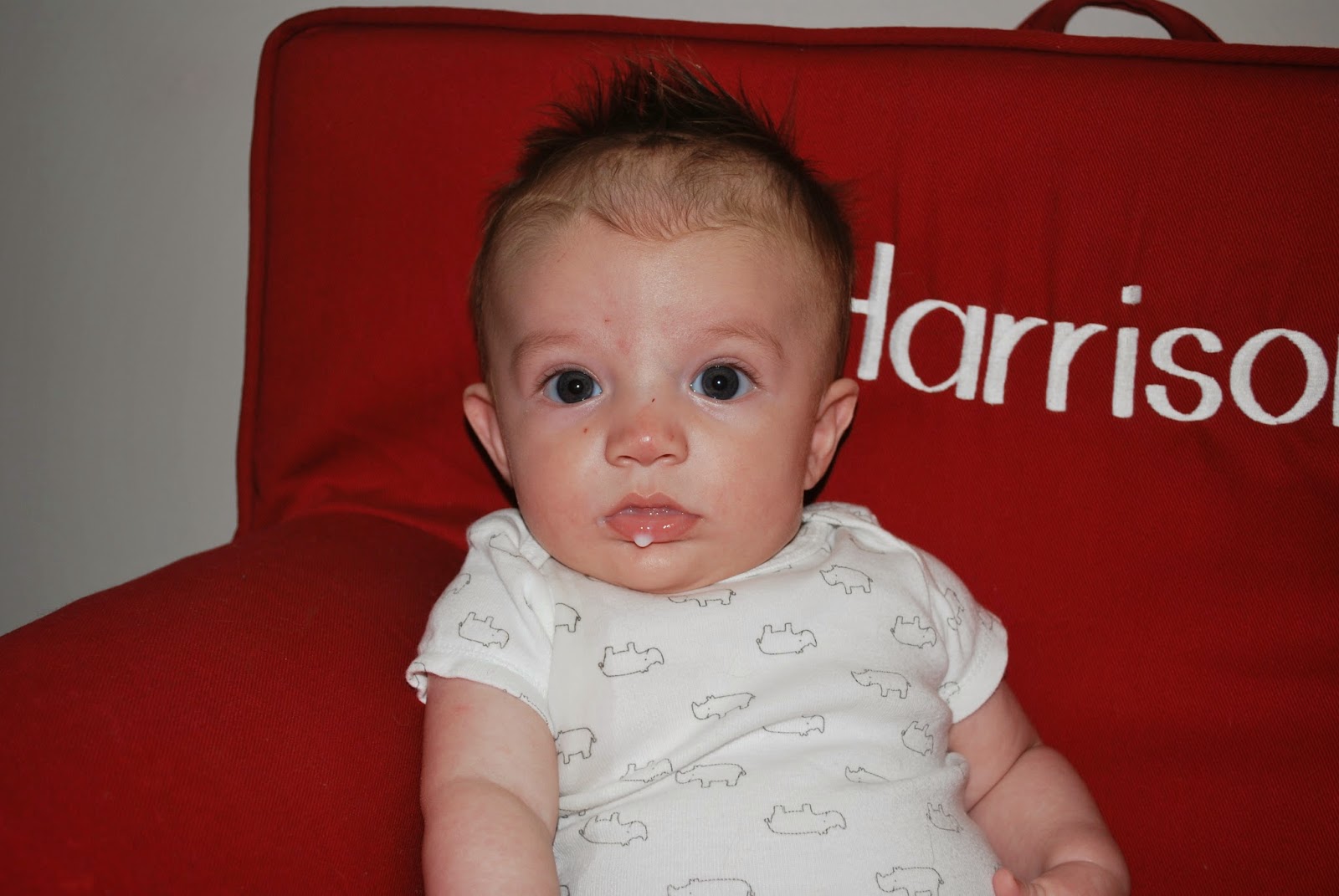 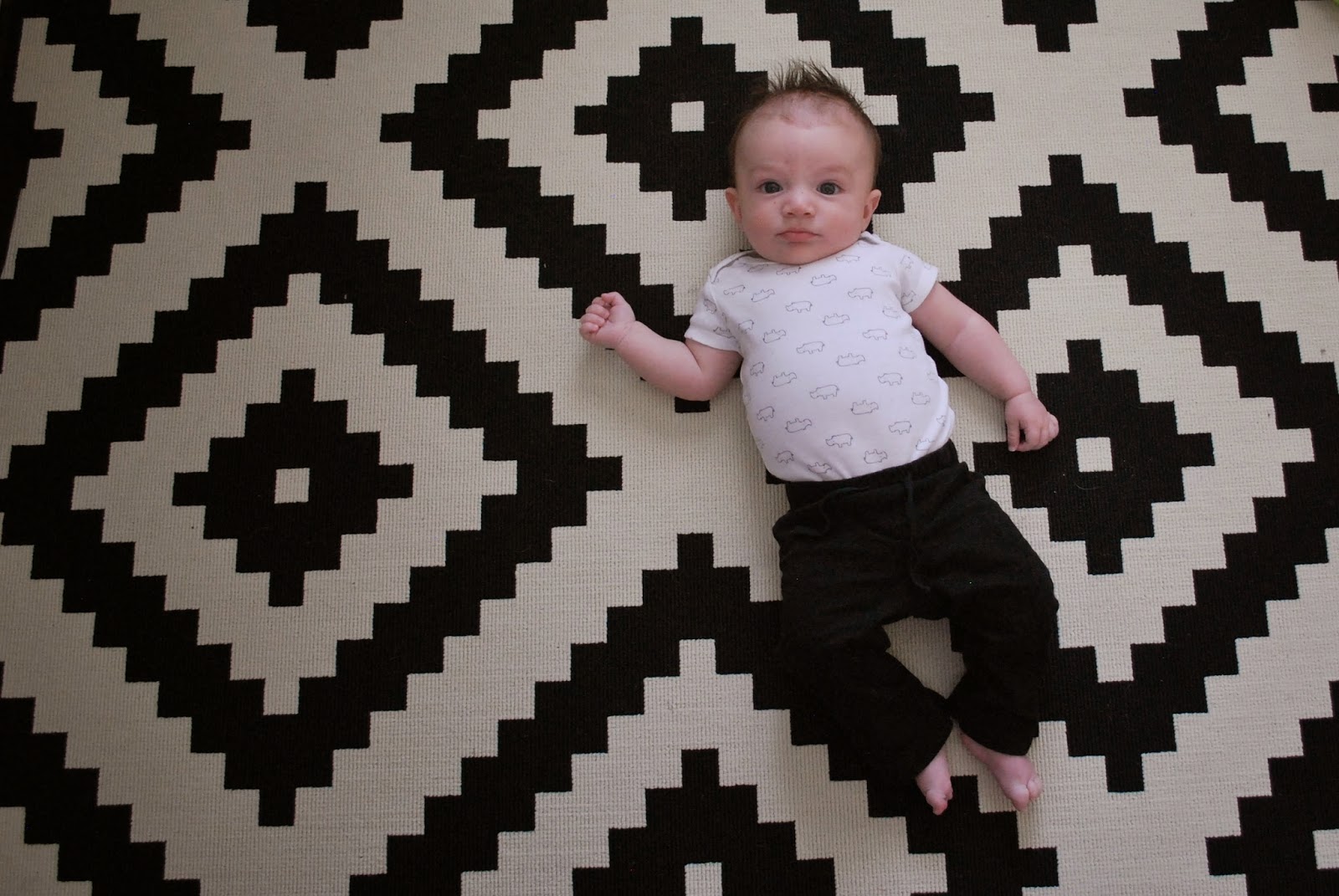 Oh sweet Max, you melt my heart a little bit more each and every day.  We love you so much and can't wait to see what month #4 has in store for us!

Posted by Kristen at 1:28 PM No comments:

Today is MAY 1st and you all know what that means – time to kick off the 4th annual BOOKS FOR CHARLEY book drive! Our official collection starts today and will continue throughout the month of May. We’ve had such an incredible response for all of you in the past, but have a feeling that year #4 is going to be the biggest yet!

Over the past 4 years, we have watched in awe as our little book drive has grown not only in the number of books donated, but in the number of facilities who have benefited from the collections. Since our inaugural collection in 2011, Books for Charley has generated over 6,000 books, all of which have been donated to hospitals and clinics specializing in the care of children born with congenital heart defects. This year we are welcoming back our heart friends, Aly, Claire, Madison and Logan, and will be introducing a brand new member of the Books for Charley family next week. We’re so VERY, VERY, VERY excited!

New to Books for Charley? Click HERE to learn about our yearly book collection and for posts about previous donations!

We would LOVE to have you participate in this year's collection, and there are so many ways to support our cause. Some families have chosen to hold "Books for Charley" birthday parties while others have created flyers/donation boxes to set out at work. The possibilities are endless and we always love hearing how people think outside of the box! Whether you participate on a large scale or simply donate a book or two, each contribution makes a HUGE difference.

Local drop-offs:  Please email us at charleysheart@gmail.com if you would like to coordinate a drop-off in the Omaha/Lincoln area. We've got family all over town and can work out a plan that is most convenient for you!

Harlan, IA donations:  If you live in the Harlan area and would like to make a donation, books can be dropped off at 1407 Willow Street (Jan Goeser). Please contact her if you would like to coordinate a drop off.

Mailed donations: Last year we had books come in from all over the country! If you would like to send your donation through the mail, please use the address listed below.

Just a reminder, these books are going to sick kiddos in hospital and clinic settings. Because of this, we ask that you send NEW books only. Less yucky germs that way! :)

Amazon Wish List:  This was a new way to donate last year and ended up being our biggest source of non-monetary donations. Simply click HERE to be directed to the Books for Charley wish list on Amazon.com. There you will find a list of over 200 books that were hand selected for this year’s book drive. Any book purchased from this list will ship directly to us, eliminating the need for a trip to the post office! And the best part? All orders of $35 or more qualify for FREE shipping. Just make sure to include your name in the message box provided so that we know who the donation is from. We like to give thanks where thanks are due!

PayPal donations:  Click HERE to be directed to the Charley's Heart website. From there, look for the "Donate Now" button on the right hand side of the screen. This was a HUGE source of our collection last year with more than $1500 in donations received during the month of May.


Thank you all in advance for your continued support of Charley’s Heart and Books for Charley. May is a very difficult month for everyone who knew and loved our little girl, but it is so much more manageable knowing that we have all of YOU rallying behind us. Thank you for helping us celebrate sweet Charlotte this month – I know that she would be so very proud!

Posted by Kristen at 6:00 AM No comments: