In my Books for Charley post last Thursday I mentioned that we have two brand new families joining our collection this year.  Much like Aly, Claire and Mason's collections last year, the books that these families collect will be donated to their OWN hospital/clinic.  These hospitals, the employees who work in them, and the other families that become a part of our lives as a result of hospital stays, have such profound effects on our lives.  These book donations, though small in the grand scheme of things, are just another way for us to give back to them for all that they do.

The first kiddo that I want to introduce you all to is Logan.  I first met Logan through his mom's blog, "When Life Hands You a Broken Heart" and quickly fell in love with his sweet grin and goofy antics.  He's definitely Mr. Personality!

You might recognize the blog above as one that I have mentioned on Little Miss Ritchie before.  Logan's mom, in my humble opinion, is kind of a big deal in the heart community.  Through her yearly blogging event "Every Heart Has a Story," heart families are able to share their personal journeys and connect with one another.  We've taken part in this event for the last 3 years, and Stefenie also shared Charlotte's story as a part of her CHD Awareness series "Interview with a Heart Mom."  I was so excited when they agreed to help with Books for Charley!

Our lives were shattered with the utter of four little words, “I hear a murmur.”  As our pediatrician looked up from our two week old son and began to explain how I needed to take Logan down the hallway for a few tests I found myself in complete shock.  In total disbelief that this was even happening I felt numb.  I simply followed orders and walked down the hallway with my mom to get Logan an EKG and chest x-ray.

What was supposed to be a happy day filled with our new baby boy’s two week well child checkup, a photo session with our three year old and his baby brother and fun time with Grandma quickly turned into every parent’s worst nightmare.  When the tests were complete we returned to the office to await the results.  Making the phone call to my husband who was at work was not only emotional but very difficult.

In a matter of minutes your life can change forever.

Three days later we found ourselves sitting in an exam room at the Children’s Hospital, an hour and a half away from our home, reeling from the news we had just been handed.  We received confirmation that something was indeed wrong with our baby’s heart but what we thought was just a Ventricular Septal Defect turned out to be much more severe.  Our precious little guy not only had a VSD but he also had D-Transposition of the Great Arteries, Double Outlet Right Ventricle, Pulmonary Stenosis and a Right Aortic Arch.  All of which were killing him.  His oxygen saturations at the time of his diagnosis were in the 60’s and he was in heart failure.  He required immediate intervention in the pediatric cath lab to save his life.  Those final moments that I rocked him before they took him into the cath lab were the most agonizing moments of my life.  I was devastated by his diagnosis, fearful of the unknown and terrified of losing him.

After many tears and several hours later he came out of the cath lab and was placed in the NICU.  For the next three days we were thrust into what seemed like a foreign land with a foreign language.  We had to learn medical terminology, take CPR, understand Logan’s new cares and come to grips with everything his future would entail.  It was overwhelming emotionally, physically and mentally.  Yet we were so unbelievably thankful to have our baby boy still with us.

We were able to take Logan home for two weeks before it was time for his first heart surgery.

When Logan was five weeks old he had his first heart surgery, the BT Shunt.  Handing my baby over again to the arms of strangers was incredibly hard.  I was a wreck the entire time he was in surgery and praying that he would make it out.  Several hours later he did and seeing him for the first time after surgery was quite traumatic.  They show you pictures in a book prior to surgery to try and help you to cope with all of the things you are going to see post op but it doesn’t even come close to what it is actually going to be like.  The many, many machines pumping lifesaving mediations through his body, the ventilator helping him breath, the shocking scar running down his chest, the constant beeping of monitors, chest tubes protruding from his chest, and his little lifeless body laying there unable to move or open those big brown eyes.  It was absolute torture not being able to pick him up and swaddle him in my arms.

Logan spent the next 31 days in the hospital suffering many complications and setbacks along the way.  He had focal seizures, bloody stools later determined to be caused by a protein allergy, breathing difficulties and a severe oral aversion that led to needing a feeding tube.  Being away from our three year old son, Wyatt, for so long was hard on all of us.  He came to visit on the weekends but it was so upsetting to him and us every time he had to leave.  All we wanted was to be together again and once Logan was stable enough we did.

Logan was still very sick when he came home.  He was on many heart medications, had severe acid reflux, a severe oral aversion and a feeding tube.  We spent a lot of time the next eight months going to see our pediatrician and traveling for cardiology follow-ups.

When Logan was ten months old he had his second heart surgery, the Rastelli.  This time around we were more prepared and took the speed bumps along the way post op a little better.  His recovery time was much shorter despite developing a cyst behind his vocal chord that required laser removal so he could breath, trouble coming off of milrinone and a mystery infection.  During the Rastelli surgeons replaced his severely stenotic pulmonary artery with a synthetic conduit.  Since the conduit would not grow with him we were told to be prepared for more surgery in the future to replace it as he grows.

Brining him home from this surgery was such a huge celebration for us.  It was the first time were going to be able to take him out in public, attend family gatherings and just feel like a somewhat normal family again.  Six months later, however, we were quickly reminded that the world of Congenital Heart Defects can be unfair.  We learned at a routine cardiology checkup that Logan’s conduit had a huge bulge in it and he was going to need a chest CT Scan to determine how serious it was.  When the results came back it was confirmed that Logan needed an immediate cath to see if they could perform an intervention to buy him a little more time before he needed surgery again.  We were devastated because we had originally been told to not expect surgery for a few years, not months later.  Thankfully the trip to the cath lab was a success and it bought us some time.

Logan endured his third heart surgery when he was three years old to replace his conduit and remove a muscular growth from his right ventricular outflow tract.  This surgery was one of the hardest for me personally.  It was very different than handing over my baby that I barely knew.  This was my sweet little boy who kissed me, hugged me, shared with me his sunny little personality and was the light of my life.  The thought of having that ripped away from me was agonizing.  But Logan once again pulled through his surgery and recovery despite suffering a surgical complication known as Dressler’s Syndrome which causes fluid to develop around the heart along with other symptoms.

Since then Logan has grown into a vibrant free spirited six year old little boy who lives each day to the fullest.  He is sweet, silly and funny.  Looking at him now you would have no idea all of the things he has been through the past six years.  He started kindergarten this year and has been busy making friends, something he has wanted for so long.

Every person in our family has been changed by this journey.  While it has not always been easy and will continue to be something we have to battle every day in the future as Logan will require more surgeries, we wouldn’t trade it for anything.  It has made us who we are, brought us all closer and taught us so much about what is really important in life. 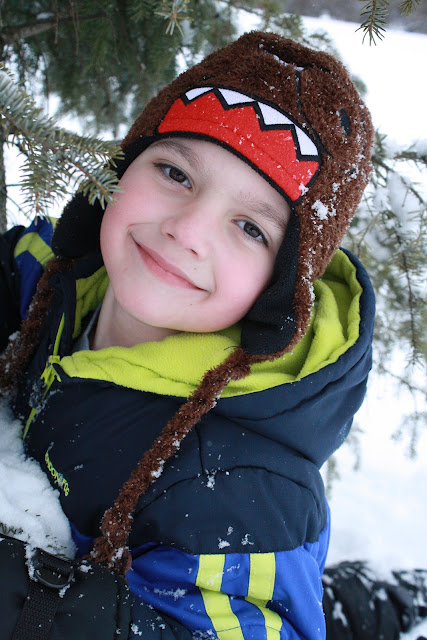 We are so excited to be taking part in Books for Charley and we hope to collect as many donations as possible for the University of Iowa Children’s Hospital!

To learn more about Logan’s journey and to follow our family’s story visit our blog at http://www.whenlifehandsyouabrokenheart.blogspot.com

Thank you, Stefenie, for sharing Logan with all of us and for agreeing to help with this years Books for Charley!  As an Iowa girl myself, I'm super excited that the University of Iowa Children's Hospital will be a part of this years event!
Posted by Kristen at 6:00 AM