September 9th, 2016, I woke up with an unsettled, paranoid feeling. I’d been going in to my OB’s office  daily for the previous 3 days to get steroid injections, readying our sweet babe’s lungs for an early 36 week c-section delivery a week later. They had checked my fluid 2 days earlier and noted that it was still within a safe range, but was definitely less than it had been the previous week. Low fluid is what lead to Charlotte’s early (and emergent!) arrival, so I was definitely on high alert to even the smallest changes. Baby boy was moving…meeting all requirements for kick counts…but it was just “different.”

All morning long I poked and prodded at my belly, trying to encourage him to stay active. Sometimes he cooperated. Sometimes he was quiet. Nothing abnormal by normal baby standards…but hello…paranoid. I even laid on my side in the middle of my office, eating a candy bar and watching Netflix trying to get him going….because again…paranoid.

I left work early that day. Came home, rested, ate dinner with Matt and the boys, all the while debating on whether or not I should go in to get checked out. Baby was moving, so it seemed silly. Anyone who knows me can attest to the fact that I’m terribly indecisive. This was no exception. I called the hospital for advice, and the RN on the other end told me exactly what I needed to hear. “Better to come in now, even if its nothing, than to stay up all night worrying about it.” AMEN, sister. I just needed someone to tell me what to do!

I remember the details of that night so vividly. I tucked in H and Maxo, saying prayers, giving kisses, telling them both that I would see them in the morning. After that I snuck into our bedroom and gently woke up Matt, who had gone to bed early because he had to work an overnight shift. I whispered to him “I’m going to the hospital. Its no big deal, I just need some reassurance. I’ll be home before you have to leave for work.” I don't think he probably heard a word I said in his half-asleep state. My mom met me at the hospital (maybe her mama’s instincts were kicking in much like my own) and sat with me while they hooked me up to monitors and did a quick ultrasound. The nurses told me everything looked good.  And because I'm a crazy person - I then became irritated because I made a trip to the hospital for nothing.

Little did any of us know that my uterus and I had quite the reputation in my perinatologist’s office. Two strangers walked into my observation room (the partners of my OB and high-risk OB), and after some quick introductions uttered the words “You’re going to have a baby tonight.” Uhhhhhhh…….what!? Panic set in. You guys. I’m a planner.This was not my plan. Matt was home sleeping. He had to work. The man who had delivered all of our kiddos (and was supposed to deliver this one as well) was home in bed too. These people standing in front of me were total strangers. I had a hundred different “but…but…buts…” but the instructions left for them by my trusted MD were clear. “If Kristen Ritchie shows up for ANY reason, that baby is coming out.”


After startling Matt awake with the words "Whelp, we're having a baby. When can you get here?" my mom headed out to stay with the kids and he made his way to be with me. Less than an hour later, just after midnight, this happened. 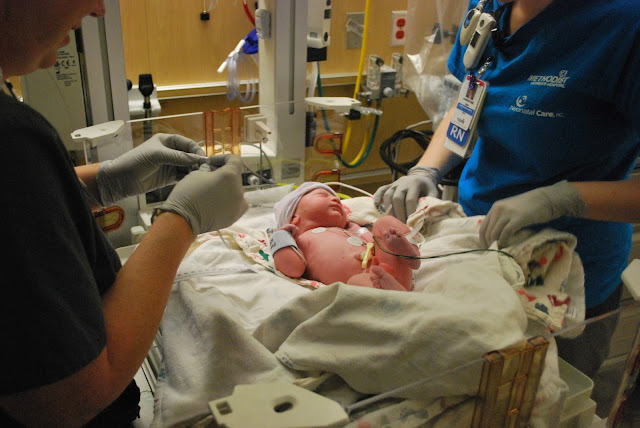 I thank God every day for planting that seed of worry in my heart. For showing me again and again that He's got my back. For reminding me to let go of my crazy and to trust in His plan.

I thank him every single day for this little boy that we call Brooks.

Happy birthday eve, Brooksy Babe. You are loved more than you will ever know.