Wrapping up a nice quiet weekend at home. It was nice to do "nothing"...though its never really "nothing" like it was in the pre-Charlotte days! She always keeps us busy with something!
Here's a sneak peak into Charlotte's Sunday.
We started out with cinnamon roll pancakes for breakfast. Ok....Matt and I did anyway. I thought Charlotte would like them but she wasn't in the mood. Her loss...they were seriously yummy. I tried to post a picture, but for some reason it wouldn't let me. Go to recipegirl.com if you want to check them out. There is a recipe for a cream cheese glaze as well, but we passed and they were still delish.

After breakfast Charlotte practiced kneeling. She used to cry and have a death grip on the bin when I would make her do this. Now she is perfectly content and will dig for toys. Little by little baby girl! 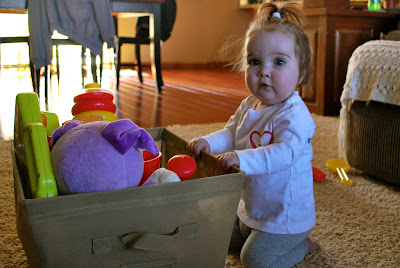 When she got sick of kneeling, she used her legs to stack rings. I only helped with the yellow one because the hole is small and she was coming from a weird angle. Otherwise, it was all her doing. What a goof! And notice the sippy cup by her head....we finally found one that she likes! 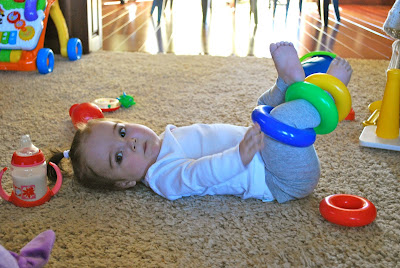 Last but not least, she made some phone calls to catch up with friends. I caught a photo of her actually using a phone, but before that she was using the rings seen above. 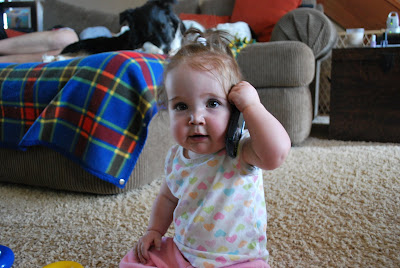 Hope you all had wonderful weekends!
Posted by Kristen at 7:53 PM