As the holidays wrap up and we inch closer to 2011, I wanted to take the time to share a story with all of you that I have been meaning to post for weeks--the story of a family of 5 trapped in a blizzard and the angels that helped them through!

As many of you may remember, we made a trip to Omaha for Charlotte's heart cath on December 10th. We had an overnight stay in the hospital and were released the following morning. It had been a long couple of days and we were soooo ready to be home. So ready, in fact, that we managed to underestimate the term "blizzard" that was being thrown around in the weather forecast. We've traveled in some pretty crappy weather before...and used this to justify giving it a go. We loaded up the car with our baby and 2 dogs and hit the road. When we left Omaha, the weather was perfectly fine, but the further north we traveled, the worse it got. We mentioned turning around from time to time, but it wasn't until they physically closed the northbound interstate that we finally decided to head back to Omaha. One major problem....they closed the southbound ramp as well.


There we were. Matt, Charlotte, myself and our 2 dogs. Stuck just off of the interstate outside of Whiting, Iowa. Time for a new plan. We drove into town (which was by far the scariest 3 mile drive of my entire life--thats how bad the weather was on open highway) and decided to look for a hotel.


For those of you unfamiliar with Whiting, IA, I did a little "wikipedia" search and here is what I found.


"As of the census of 2000, there were 707 people, 301 households and 189 families residing in the city. The population density was 705.1 people/square mile. The movie Children of the Corn was filmed mainly in the vicinity of Whiting."


What I'm getting at here is that there are no hotels in Whiting, IA.


As we sat dumb founded in our car, me on the verge of tears and not knowing what we were going to do, there was a knock on our car window. This knock changed everything.


The community of Whiting opened their doors and hearts to many people that night. They welcomed stranded truck drivers, mothers, fathers, grandparents, children and 2 dogs (!) into their community center when we had no other place to go. Not only did they give us a place to take refuge, but they brought us food, drink, games, blankets and pillows. They gave our family access to their city hall so that we didn't have to keep our dogs on leashes. People offered to let us stay at their homes. They gave and gave and gave--making what started out as a frustrating and terrifying situation more comfortable that I could have ever imagined. We even got hugs when it was time to leave--haha--I'm totally a hugger!


We left the website address for this blog behind with a thank you for the city clerk who orchestrated our "rescue"...I'm not sure if she has visited the blog or not, but just in case... 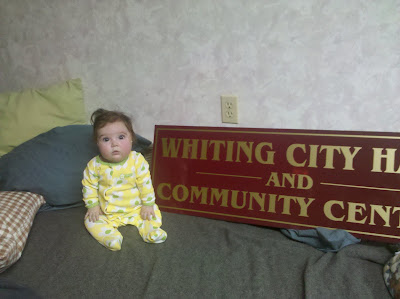 THANK YOU for everything that you and the town of Whiting did for my family. We have shared the story of your kindness with so many people. In the past 3 weeks, I have gotten just as many text messages from people simply stating the words "Passing Whiting =)" as they drive on the interstate. You gave without hesitation and without the expectation of anything in return. As frustrated and angry as I initially was to be "stranded," I consider our family blessed to have met all of you. You are forever in our hearts!