Well folks, as of yesterday I officially became more pregnant than I have ever been before.

Yesterday I was 37 weeks and 2 days…one day further than I made it with Charlotte.

So far our little dude seems to be following orders content with his current environment and isn’t giving any major signs of his impending arrival. Each passing day gets a little more “interesting” as he packs on the fat and gradually runs out of room. It’s crazy though, because it’s almost like the LESS room he has the MORE active he’s become! I’m definitely taking a beating.

Sleep has become, for lack of a better term, crappy. I’m used to getting up once in the middle of the night for trip to the bathroom, but for the past week or so I’ve been averaging three trips. Number 3 usually happens around 4:30 AM and then for some reason Mr. Mister thinks it’s rock and roll time. Lovely.

You would think that with all of the “complaining” that I would be encouraging this little guy to get a move on, but instead he is under strict orders to set up camp for another two weeks. Our big move is set for the 23rd and I “expect” him to wait until after that! (I'm such a mean/demanding Mama!)

On Monday I went and saw my OB in Omaha—the same OB that delivered Charlotte. Something about the thought of him bringing her little brother into the world as well is really comforting …comforting and emotional all at the same time. All looked really good at my appointment. You might remember that part of the reason I went early with Charlotte was that my amniotic fluid was really low. She didn’t have much to keep her suspended and ended up lying on her cord which made her heart rate drop. I’m happy to say that Mr. Mister’s pool is full and he’s happily floating around in there (as much as he can with the space constraints anyway!) He’s right on track size wise and they estimate that he’ll pack on another pound in the next 2 weeks. We’ve got somewhat of a plan in place. I would totally share…but what fun would that be?! You know how I LOVE a good secret! Those of you who DO know….SHHHHHHH!

Here's my baby belly with Charlotte at 37 weeks.  Little did we know that the very next day we would be scrambling to Omaha to meet our little girlie! 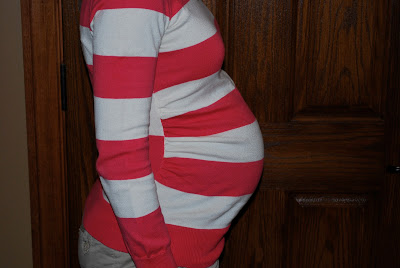 My Oh My...there is definitely a baby in there!  Here I am at 37 weeks and 3 days with this feisty little boy!  I think that I look bigger, but I'm measuring almost the exact same.  I think that Charlotte had dropped quite a bit at this point, but this guy is riding high and tight!  Must be because of all those threats I've been making about staying put! 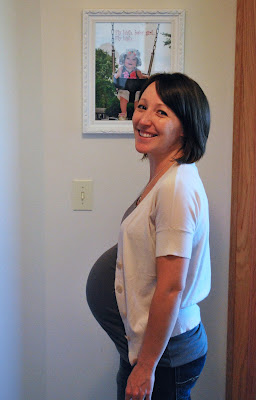 I still can't believe that it's almost time to meet this little guy.  I feel like we've been waiting so long to hold another baby in our arms, but at the same time it has all gone so quickly.  I can hardly wait for non-stop snuggles with "Mr. Mister Franklin E. Ritchie"!
Posted by Kristen at 8:39 PM